A lesson every athlete is taught from an early age is to run through the line, and this evening in Beijing, USA’s Molly Huddle will be rueing the most basic of errors. With the bronze medal firmly in her grasp in the women’s 10000m final, the American incredibly snatched defeat from the jaws of victory, easing up in the final five metres, flinging her arms into the air in premature celebration, only to be passed by teammate Emily Infeld in the last half metre of the race.

“I blew it pretty much” remarked a dejected Huddle, who turns 31 at the end of this month. “That kind of race doesn’t come around a lot, and the Olympics are usually really fast from the gun. I’m old, so I’m probably not going to get another one of those. It’s frustrating.”

The race was won by Kenya’s Vivian Cheruiyot in 31:41.31, following a pedestrian pace throughout. Ethopia’s Gelete Burka claimed the silver medal ahead of the US duo. “This will take a lot of time to get over. That race was an opportunity for someone to medal, who will probably not get that chance again. It was just so slow and I didn’t want to mess up on the last lap, and I did. I blew it in the last steps. I don’t know when that chance will come again.”

For Infeld, the moment was something she described as bittersweet. With PBs of 15:07 for 5000m and 31:38 for 10000m, she far exceeded any expectations she possessed entering the championships, where she stated that a top 10 finish was her goal. But the manner of how she claimed the medal was something she admits to feeling guilty about.

“I feel that is the toughest part about this” said a stunned 25 year old afterwards. “It’s a hard way to win a medal. I feel a little bad for Molly because she’s amazing and incredible, and she has worked so hard, and I hate to feel like I took that from her, but I’m happy at the same time.” 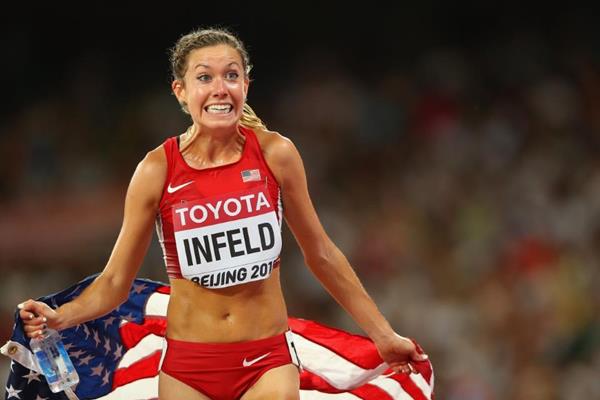 However she described how she went through a similar experience earlier this year at the National Championships, and how it helped to refocus her for this event in Beijing. “Shalane Flanagan was talking to me after USAs, after she beat me there, because I let up before the line, and she said to me that I am never doing that again, that I am always running through the line. She said she beat me because I let up the last 5 metres. So today I was just thinking of running through the line.”

The video of this race will no doubt be shown to young aspiring athletes the world over, for many years to come.