With the Olympic Games less than one month away James Sullivan has been chatting to London-bound marathon runner Ava Hutchinson.

Ava Hutchinson is an elite distance runner from Dublin, Ireland, who specialises in the marathon. She has been selected to represent Ireland at the 2012 London Olympic Games on the back of her 2:35:33 clocking at Houston in January 2012. She has represented Ireland at the European Cross-Country Championships and has claimed national titles both on the country and the road. 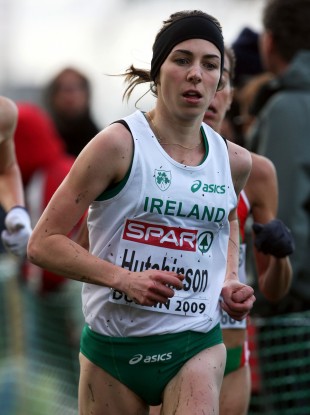 Competing at the 2009 European Cross-Country in Dublin

Ava: I first started running after I was asked to make up the numbers in our school cross country team. I really enjoyed the whole experience of competing and was doing pretty well in races so I then decided to join my local club.

Ava: Sonia O’Sullivan was a huge idol of mine growing up.

James: When did you realise that the marathon distance would be your future in the sport?

Ava: I had always intended on moving up to the marathon at some point. When I saw the qualifying standards for London I felt like it was the perfect opportunity to throw myself into it and give it a go.

James: You ran your debut marathon in Dublin last year and faded in the second half of the race to clock a 2:43. Can you describe the experience? What did you learn from it?

Ava: To be honest Dublin wasn’t a fun experience for me at all but I was able to learn a huge amount from it. At about the 8 mile mark I had a problem in my calf which caused me to have to keep stopping throughout the race. At half way I knew my chances of getting the Olympic qualifying time were gone but I was determined to finish and at least go through the process of completing the marathon.  I felt it was important to learn everything I could about the distance in order to help me for the next one.

James: You ran the Houston Marathon just three months after your debut in Dublin. Did you see this as a gamble at the time?

Ava: Within a few hours of finishing Dublin, my coach was already discussing Houston as the next possibility for a marathon. He felt that as long as I could resolve my calf issue quickly, the race itself shouldn’t have taken too much out of me aerobically. I know a lot of people see running another marathon so soon as a big risk, but to be honest I didn’t really give it too much thought as my coach was so confident it would all be fine.

James: At the Houston Marathon you achieved the Olympic A-Standard with a time of 2:35:33. Can you put that experience into words?

Ava: The whole aim in Houston was to go out at 2.35 pace and run even splits for the entire race which I felt pretty confident I could do. So many things can go wrong in a marathon though (which I had learnt in Dublin!) so it felt absolutely brilliant to run down the finishing straight, look up at the clock, and realise that everything had gone to plan. It wasn’t until later that night that the realisation of what my coach and I had achieved really started to sink in.

James: As has been well documented, four Irish women achieved the Olympic A-Standard in the marathon. With each country receiving a three person quota, one athlete unfortunately had to miss out. Were you worried that you would not be selected? Can you describe how you felt during the weeks leading up to the announcement of the team? Did you do anything to take your mind of it?

Ava: I felt confident that what I had done in Houston would be enough for me to gain a position on the team but obviously there is always that bit of doubt in the back of your mind.  I tried not to give it too much thought though. I just threw myself into training, and focused on trying to be in the best shape possible for August should I be selected.

James: Can you describe how you felt when you were informed that you had been selected to represent Ireland in London?

Ava: It was a mixture of both relief and enormous happiness that, as clichéd as it sounds, a life-long dream had come true.

James: Do you feel sympathy for Maria McCambridge, who missed out on selection? En route towards the Olympic A-Standard in Houston

Ava: I have huge sympathy for Maria.  All 4 of us had successfully run the A standard and also had times that were within only a minute and a half of each other.  We had all earned the right to be on the team so it was always going to be a tough decision to select just 3 of us.

James: What are your goals for London?

Ava:  My goal is to run a personal best time and with that, to be as competitive as possible.

James: Houston aside, what one moment from your career to date are you most proud of?

Ava: Making the European Cross Country team in 2009 when it was held in Dublin was an amazing experience that I always look back on with pride.

Ava: When in marathon training I’d normally run somewhere between 100-110 miles a week. We work on a 2 week cycle where we’ll have a hard session every fourth day.  Our sessions include a long run, short track intervals, longer road intervals and a tempo.

Ava: My favourite training session is the long run. You get a huge sense of satisfaction when it’s done and it also means you get the afternoon off!  My least favourite session is the tempo run as you’re normally always doing it on tired legs which can make it really tough.

James: Do you do any cross training and if so what type, how often and why?

Ava: I don’t normally cross train but if ever I’m injured I aqua jog to try and keep some fitness.

James: What are your views on Planned Marathon Pace runs for club and recreational runners? How long should these be and how many should be undertaken in a training program? Do you do any and how do they help?

Ava: There isn’t a great deal of money in Irish athletics which isn’t a criticism but just a fact.  The majority of athletes aren’t on funding and have got to where they are off their own backs which is something that should be praised and not criticised. The media are often too quick to criticise and seem to have unrealistic expectations. If athletes are not funded then it’s not realistic to expect that great numbers of people are going to be continuously performing at a world class level. The hope would be that we can get more money into Irish athletics over the next few years so that more athletes can have the opportunity to live a life that will give them every chance at performing as a world class level.

James: There have been no Irish broadcasters at the past two World Championships. What can be done to help the sport gain more media exposure in Ireland?

Ava:  There have been some great successes in Irish athletics over the last year which have helped the sport to gain more media exposure. Fionnuala’s gold medal at the European Cross Country Champs back in December is a great example of this.  Not only was her performance incredibly inspiring to all Irish athletes but it also helped to get athletics back into the media spotlight in a positive way. Hopefully there will be more success stories from London this summer which the media can get behind and make the public aware of what a great sport athletics is.

Ava: Yeah, I love watching all sports including athletics. At the minute I’m training out in America and the US Olympic trials were on recently. I really enjoyed watching Ashton Eaton compete in the decathlon where he broke the world record. It was an incredible performance in such a gruelling event. It’s going to be exciting to see what he can do in London.

James: That’s great Ava. Thank you for your time and the very best of luck in London.