With the World Championships in Daegu just one month away, James Sullivan has been having a chin-wag with Ireland’s hurdling heroine Derval O’Rourke. 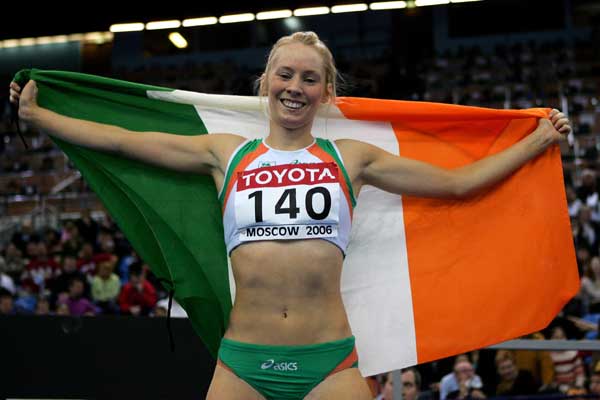 James: Thank you for taking the time to talk to The Running Review. Easy questions first, what is your earliest memory of competing in athletics and what was it that attracted you to the sprint hurdles?

Derval: I vaguely remember running in Belfield in the all-irelands under 8! I ran in the 60m and the 80m. I think I came second and third. I started to do hurdles when I joined Leevale around the age of 12. I had a great coach in Leevale for hurdles called Seamus Power and I think that was a big part of the attraction to hurdles. He made the event very fun for me

James: Who was your athletics idol growing up?

Derval: Growing up in Cork Sonia O Sullivan was a great athlete from the same county so I looked up to her a lot. I always wanted her autograph (I’m not sure if I ever got it!). When I was a teenager I thought a lot of the senior athletes were really great. Terry McHugh, Karen Shinkins and Peter Coghlan.

James: What one moment from your career to date are you most proud of and take the most satisfaction from?

Derval: I’m probably the proudest so far of winning the world indoors because on that day I was the best in the world and that’s an amazing thing to have done. In terms of satisfaction I think running a national record at the world outdoor championships in 2009 and finishing fourth was very satisfying. I had a bad 2008 and dealt with a lot of blows. To be able to come back from that and prove that I was still a good athlete felt great. I still wish it was a bronze though.

James: At last year’s European Championships in Barcelona you claimed the silver medal in a national record time of 12.65 seconds. Can you put that experience into words?

Derval: It was bittersweet. I did all I could on the day in that race but I wanted to win. To lose gold by 2 hundreths was hard but to set a national record made me quite happy. I felt in that race that if I could beat Carolin Nytra that would win it but I didn’t predict Yanit running as fast as she did.

James: How are your preparations coming along for the World Championships in Daegu this August?

Derval: They are coming along well. Since indoors training has gone well and I’ve been happy with my sessions. I would like to have some faster races under my belt but hopefully that will come soon.

James: With just over a year to go, how much is London 2012 in the back of your mind right now?

Derval: London is relevant in a more practical way. Any changes that I have wanted to make needed to be decided and done by now.  I pretty much have my team and set up in place to get ready for Olympics as soon as this season ends.

James: You have built a strong reputation as a championship performer, running national records in Moscow, Gothenburg, Berlin and Barcelona. What is it about a championship setting that enables you to raise your game?

Derval: My whole training year is based around the championships. I’m lucky that my coaches always have me ready to peak when it matters. Then on top of that I really enjoy championships. I love the atmosphere and the excitement of them so I guess that just gives me extra adrenaline and I just run my best. I think if I ran fast on the circuit but could not do it on the biggest day of the year I would find that disappointing. I put all my eggs in one basket and thankfully it has paid off a few times.

James: Can you describe how important Sean and Terri Cahill have been in your development to becoming a world class athlete and how has training with Irish 100m record holder Ailis McSweeney benefited you?

Derval: Sean first started helping me 6 months before I made my big breakthrough in 2006. He has been hugely important in every good race I’ve had. Sean and Terrie basically do all the hard work in terms of training programmes and being at the sessions all year long. If they were not as good as they are there is no way I would run fast. They are world class at what they do and I’m hugely aware that without their input I would not be the same athlete. Ailis is a perfect training partner. She is fast, very tough and a great laugh. I’m not sure what else I could want in a training partner. All in all in terms of coaches and training partner I’m a lucky girl.

James: What would an average week of training be like at this time of the year, specifically in terms of key sessions? How does off-season winter training differ from spring and summer training?

Derval: I love fast hurdles during the season and heavy lifting sessions. I don’t really like any long interval session with short recoveries and I don’t enjoy hills.

4th at the World Championships in Berlin

Derval: I just try to be as healthy as possible. I try to eat lots of fruit and vegetables plus also chicken and fish. I generally try to be good 80% of the time and 20% of the time be more relaxed. For me in everything there needs to be balance. I need to eat well but still be able to have a bar of chocolate if I want it.

James: You are an example of an Irish athlete who can be based at home and still succeed at the highest level. However, at this moment, many of our top athletes are still basing themselves abroad. What needs to be done to attract more athletes to base themselves in Ireland?

Derval: I think everyone has to do what feels right for them. For me personally the benefits that come from being at home with family and friends outweigh going somewhere for better facilities/weather. I have world class coaches in Dublin. I think maybe more coaching support would help give Irish athletes more options to stay at home. If there are good coaches and good training groups then it is very doable to be in Ireland.

James: Do you feel athletics in Ireland gets its fair share of funding or can more be done to help the sport develop? Ireland still doesn’t have an indoor running track for our top athletes based at home. How much of a problem has this been during winter time?

Derval: It’s so easy to find problems or pick holes in what we do or don’t have. I chose to stay here accept the way things are and train my butt off. Things could always be better but it is what it is. My job is to run as fast as I can and not stress about things I have little input into.

Derval: Maybe the sport could be promoted more. It’s an individual sport so it’s harder to sell than team sports so that might be something to consider. I think there could be better use made of the higher profile athletes to help promote the sport to kids.

James: In Victoria, Australia there is a state run track and field series called the AV shield which aims to get people of all ages, abilities, shapes and sizes competing in the sport. In Ireland, while there has been a huge running boom in recent years with more and more people attempting 10K’s and marathons, the numbers competing in track and field is very low and of a more elite nature. Should more be done to develop more of a grassroots culture in our sport in Ireland and to get the average Joe onto the track?

Derval: I think we are doing really well with the amount of people who go out and run each day in Ireland at every level. I think the track is more intimidating for non elite athletes than road running so I think if we could keep the numbers up on the roads then that’s a positive.

James: Which one of your competitors do you have particular admiration for?

Derval: I have major admiration for Brigitte Foster Hylton. She won worlds at 34 and is a class act. She is a wonderful hurdler and a great person. I’d love to have some of her results to my name.

Derval: I’m a huge fan of the sport so I love to watch. I’m big into marathon so I’ll always watch the big marathons. I’ll tune in and watch any meet that is on TV. I like watching Jessica Ennis in major championships. Of course Usain Bolt brings excitement too.

James: What is the most important piece of advice you have for all athletes, regardless of ability?

Derval: Don’t stress about things that you can’t control. If you work hard towards a certain race just take a deep breath and enjoy it. Remember you run because you love it so enjoy it.

James: Away from the track, what one country in the world would you like to visit most and why?

Derval: I travel lots with athletics so honestly there is nowhere that I haven’t been where I would like to go. Sorry that’s a boring answer!

James: That’s great Derval. Thank you for your time and best of luck with the rest of the season.

You can keep up to date with Derval’s preparations for the World Championships and beyond through her blog.