Having spent a lot of time chatting to many top track and field athletes, James Sullivan has taken a trip into the world of swim-bike-run and has been having a chin-wag with one of Australia’s top female triathletes, Felicity Sheedy-Ryan.

Felicity Sheedy-Ryan is an elite triathlete from Perth, Australia. She has achieved victory on the ITU European Cup circuit on three occasions; in Athlone in 2009, and in Geneva and Banyoles in 2011. She finished third at the ITU World Cup event in Tiszaujvaros in 2009, and the following year claimed the bronze medal at the World Duathlon Championships in Edinburgh. To date, she has achieved three top 20 placings at ITU World Championship Series events, with her best being 14th at Yokahama in 2011. In her first attempt at a long distance triathlon, she finished in second place at the 2011 Bussleton 70.3 Half Ironman.

Victory at the European Cup in Geneva

James: Thank you for taking the time to talk to The Running Review. So to begin, how did you first get involved in triathlon?

Felicity: Funnily enough my old man needed a “swimmer” for a corporate triathlon. I happily obliged and floundered my way through, and thought “man I wanna do the whole thing”. I did that and was instantly hooked.

James: What one moment in your career to date are you most proud of?

Felicity: You can never go past wearing your nation’s colours. So it would have to be wearing the green and gold at my first elite World Championships. Closely followed by a 3rd place at the World Duathlon Championships in 2010 and my first World Cup podium in Tiszaujavaros in 2009.

James: What would you describe as the most disappointing moment in your triathlon career? What positives have you taken from it?

Felicity: Probably missing out on the World Championship team in 2010. A string of bad performances when I had set expectations so high were a blow, and I was in a bad place until I managed to reset goals, leave it behind and move forward and learn not to make the same mistakes again. En route to bronze at the World Duathlon Champs

James: What would you describe as your strongest discipline? Which do you feel needs the most improvement?

Felicity: Definitely my run is my strength. I guess it’s what comes naturally. It’s the one I can push myself the hardest on, though there is still plenty I can improve on. My weakness, well that’s my swim, it a no brainer. It has cost me my race on more than one occasion. I don’t dislike swimming, it’s just so technique based and I guess I’m a slow aquatic learner!

James: What are your goals for 2012? Are you satisfied with how you have begun your season?

Felicity: My ultimate goal for this year, like so many others, was the London Olympic Games. I have made some improvements and tried a few things differently this year. I am probably a bit behind the 8 ball of where I would usually be in terms of bike-run fitness at this stage due to some changes, but with the swim a priority for improvement for me I think my season is going to progress quite well actually. I have a feeling!

Felicity: I would usually do about 18 sessions a week, comprising swim, bike-run, gym, and lately yoga as an extra. I guess most key training sessions will revolve around an endurance session, a threshold/ speed session, and a strength based one. The rest is usually kilometres, techniques and variety depending on what needs to be done.

Felicity: My favourite session would definitely be my long run, just tapping away for 100 mins to 2 hours. I love beach sessions too. My least favourite are the ones that disrupt my beauty sleep!

Felicity: Well I’m actually a vego, so I eat a little different to some. But generally I just like to have a balance in my diet. Lots of fruit and vegies, protein and I don’t go overboard on carbs in a lead up. If I want a little treat I’ll have one. Just don’t overindulge.

James: Is Kona something which you would like to do in the future?

Felicity: God, Kona sounds horrible! haha. I’m sure I’ll get the bug one day, but for now 180km on my bike followed by a marathon in horrid conditions….uhh yeah hasn’t quite sucked me in yet!

After claiming victory at the European Cup in Athlone in 2009

James: Triathlon is a notoriously expensive sport to compete in at the highest level. How do you fund yourself?

Felicity: I have some great support from some great sponsors, namely WAIS – the Western Australian Institute of Sport, Triathlon Australia and Scody. I also receive assistance from Felt, Brooks, Shotz Nutrition, Oakley and RDIF. Then you just have to make sure you win some races to pay the dinner bill!

James: What can be done to break down the high expense barriers to participation to get more people involved in triathlon?

Felicity: Triathlon is a very expensive sport, but you don’t have to have the latest gadgets to take part. Running and swimming cost you very little, a pair of shoes and a pair of goggles, and there are some great second hand bike sites you can look into for a cheap bike. You don’t have to have a $10,000 bike to take part by any means. An old bike stuck in the garage does the trick too. It’s a lifestyle sport.

James: With a surname of Sheedy-Ryan, there must be some Irish roots there. What are your links to the Emerald Isle?

Felicity: Haha, you know it! Yes my old man is Irish, so I have a large amount of family there and plenty of ties to the Northern Hemisphere.

James: You have competed at the European Cup event in Athlone, finishing third in 2008 and taking the gold medal in 2009. How would you describe your experiences of competing in Ireland?

Felicity: Honestly, Athlone on both occasions are some of my fonder memories of races. I absolutely loved the support at Athlone and the way the Irish got behind the race. It was an awesome course and it would be so fantastic to see the sport grow there. There’s nothing like running bog laps in front of the pub in your togs haha!

James: What are your thoughts on the current format of the World Championship Series?

Felicity: I think it’s a great idea. Full credit to all the organisers who have pushed and continue to push this forward, supporting cities, sponsors, the works. It’s putting the sport in the lime light and portrays such a healthy image of sport. I also think it’s a great way to rank the world’s number one triathlete, as it really shows who is the best, and not just a one hit wonder.

James: Some people believe that drafting should be made illegal in Olympic distance triathlon, due to the fact that it causes gains in the swim to be negated very quickly, and that it makes on the bike very difficult to achieve. What are your views on drafting in triathlon?

Felicity: Haha, as a non-swimmer I might give a biased response here. Look, I find it really disappointing to see some athletes work so hard all race, who swim, bike and run so well together, that do not get the results worthy of their ability due to drafting. Or have athletes like Loretta Harrop miss out on a Gold medal at the Olympics, after clearly being the strongest “triathlete” out there. I think the best triathlete should always win the race, not the best OK swimmer/ good runner. Saying that, a lot of the top Triathletes would still be the best with or without drafting, they are that good. However, to be a spectator friendly sport, drafting is where it’s at. Smaller circuits aren’t possible without it, and when you sign into racing in this sport under the ITU format you know the rules and what you are up for. Very frustrating at times, but that’s the way it is, and I’m all for making the sport grow. If drafting helps with this growth, then until there is a better solution, that’s the way it is. 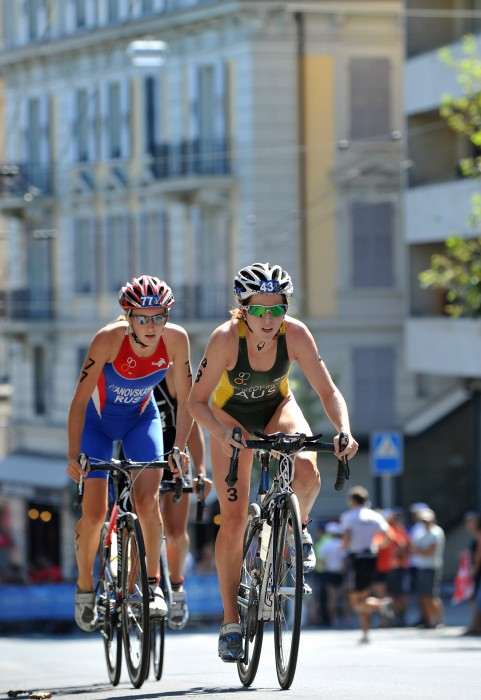 Felicity Sheedy-Ryan during the bike phase

James: Australia is a market saturated with many different sports. How would you describe the profile of triathlon in your home country? Does it get enough TV coverage and can more be done to increase recognition of the sport?

Felicity: Well if you open the weekend paper, it’s pretty much covered head to toe in AFL. Headline: AFL player scratches his nose! Front line news! Essentially that is what it’s like, and if you’re lucky they may mention the Aussie athlete who just won the World series race. It’s definitely getting more and more air time, press time etc, but it is a mere smear on the paper compared to AFL etc.

James: How do you see Australia’s prospects in triathlon at the London Olympics?

Felicity: There is definitely scope for medals at the Olympics hands down, even multiple. The girls generally sit in a much stronger position than the boys on a world scale, but hey, in the Olympics anything seems to happen!

James: What one piece of advice would you give to somebody, regardless of age or ability, looking to attempt a first triathlon?

Felicity: Definitely do it! Age is no barrier in triathlon. Start out easy and don’t get too carried away too quickly with training. Build up slowly so you don’t get injured and don’t be scared. It’s a fun experience. Enjoy it!

James: Describe why people should visit Australia in 5 words.

James: That’s great Felicity. Thank you for your time and the very best of luck for the rest of the season.

Felicity: Thanks heaps James, lovely talking to you.

To keep up to date with Felicity’s progress check out her website.