Having already spoken to a former elite Irish race walker Gillian O’Sullivan, James Sullivan has been having a chat with Robert Heffernan, one of Ireland’s current elite athletes at this discipline.

﻿Robert Heffernan is an elite race walker from County Cork, Ireland. He finished in 6th place at the 2007 World Championships in Osaka in the 20km Walk and placed 8th in the same event at the Beijing Olympics the following year. At the 2010 European Championships in Barcelona, he finished 4th in both the 20km Walk, and the 50km Walk, the latter being his championship debut at the longer event. He currently holds the Irish record for the 20km Walk (1:19:22) and 50km Walk (3:45:30).

﻿James: Thank you for taking the time to talk to The Running Review. So to begin, how did you first get involved in athletics?

Rob: I got involved through open sports and community games. Also my old club coach John Hayes was a big influence on me when I was younger.

James: What drew you to race walking over other track and field events?

Rob: I did all sports growing up including football, running and race walking. I started making big progress after a growth spurt when I was 18. I developed very late so I was an average junior. I received a running scholarship as a junior but after qualifying and competing in a European Juniors in the 10km walk I was hooked and wanted to go to an Olympics. I was drawn to the technical aspect of the event and I was good at it. It was like I found my niche. I did very little training as a junior so I had a massive scope for improvement.

6th at the Worlds in Osaka

James: At last year’s European Championships in Barcelona you remarkably finished 4th in both the 20km Walk and the 50km Walk, just three days apart. With regards to the 20km, what was your initial feelings towards finishing so close to a first major championship medal? What positives have you taken from the experience?

Rob: It was so disheartening not to have won a medal but I did what I could on the day, I didn’t have the perfect run up to the games so to have been competitive and get close was ok. When you take a step back from the championships you only then respect the level at what you compete at. There are people in the race ranging from Olympic champion, European medallists, people walking some of the fastest times in history, and standing on the line I don’t feel any less than them. None of us are guaranteed a medal so on the day the cream will always rise to the top. The positives that I have taken is that by my nature I will always have a go. It also motivates me for the following year knowing that I was so fractionally close and all it will take on another day is that extra 1% that I will gain from this years training.

James: Can you describe the experience of finishing 4th in your first major championship 50km race?

Rob: It was great. After the 20km I felt so down but I have come close to medals now a few times so decided to just get on with it. Life goes on. I qualified for the 50km earlier that year and with my wife Marian competing on the 2nd last day I would not go out to celebrate or commiserate the 20km contrary to stories I heard back that the team manager pulled a great stroke by helping me keep my head. Haha funny stuff. I decided to do the 50km to get experience of a major and went in with a clear plan set out with my coach Ivonne .This worked a treat and I got the best result out of myself on the day. It felt great as I had no expectation and to finish in 4th while smashing the Irish record eased the disappointment of the 20km.

James: In Barcelona, you started the 50km race cautiously, and finished very strongly, overtaking numerous competitors in the latter stages of the race. What was the reasoning behind these race tactics?

Rob: As I only raced 20km in 30 degrees two days prior, I was really tired and I had a hamstring injury also and had no specific 50km work done. We (myself and Ivonne) decided to take on a massive amount of fluid and food the 1st 30km and see if there was anything in the tank when I got to that stage. After doing the 20km the pace seemed so easy to me but after doing a 50km early season and blowing I learned a lot of lessons and realised the race did not start until 40km so I had to be very confident and cautious at the same time. When I hit 35-40km I felt a lot better than what I did in my early season race over the distance so I knew I was going to finish. I was also moving through the field at a savage pace and the support also drove me on even more . The feelings were all positive towards the end. I walked my last marathon in 3h05min I think.

James: What do you feel is your potential over the longer distance over the coming years?

Rob: If I get a clear run of things health wise and I have good support from my wife and kids and I am happy and hungry for success the sky’s the limit.

James: You have shown remarkable consistency in finishing 6th in Osaka, 8th in Beijing and twice finishing 4th in Barcelona. How close do you feel you are to winning a major championship medal?

Rob: Again been healthy, having a clear run of training, a good training environment and support network, and a bit of luck on the day and I feel I am not too far away.

James: How are your preparations coming along for the World Championships in Daegu this August?

Rob: Training has been really strong this year I have had some consistent races but everything is building towards Korea so hopefully all will go well.

James: Which particular event do you intend to target for the London Olympics, or have you got your eye on attempting both events?

James: Can you give us an insight into the training schedule of a racewalker? What would an average week of training be like, specifically in terms of key sessions and total mileage?

This would be a sample of 1 week but every week is different through out the year depending on the phase of training. This training would be complemented by 4-5 session of sports massage and physio if needed.

James: The current world record for the 50km walk is a staggering 3 hours 34 minutes, which equates to well under sub 3 hours for a marathon, quicker than most people can run such a distance. Do you feel that some people do not appreciate the extraordinary athletic ability of race walkers? 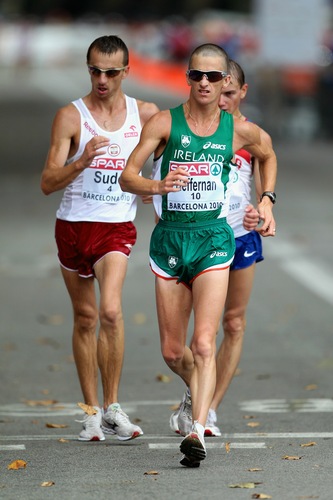 On the way to 4th in Barcelona

Rob: I think than can be the case but it’s not until you try to walk (or even run) at that speed that you can appreciate the technical demands along with strength endurance and speed. Anybody who has watched me train or compete would have respect for my sport.

James: In recent years the organisers of major championships have staged the race walking events on a 1 or 2 kilometre lap circuit in the centre of the host city. It is great for spectators, but can it be boring for competitors, doing for example, 50 laps of the same circuit during a race? Can keeping full concentration in a race like that be an issue?

Rob: For me its great. It’s like a massive stage where you can perform to the public. When you’re in good shape and going well you enjoy it. When you are concentrating so hard with competing the time can fly by.

Rob: Abolish the GAA. This would also solve the drinking problem in our country and with a clear mind, sports minded people will get involved in a sport where they will have constant challenges. Also athletics should be giving wider publicity so the up and coming kids will aspire to be the next great athlete instead of…well I better not say……

James: Do you see yourself staying involved in the sport when your career is over?

Rob: Yes, I love the sport with a passion and feel I have a lot to offer after everything I have been exposed to over the last 20 years.

James: That’s great Rob. Thank you for your time and best of luck with your preparations for Daegu.