After previously talking to his sister Jessie, James Sullivan has been having a chat with Irish 400 metre hurdler Thomas Barr.

Thomas Barr is an elite athlete from County Waterford, Ireland, who specialises in the 400 metres hurdles. At the 2011 Irish Track and Field Championships he took the title over the long hurdles in a time of 50.06 seconds, moving him up to second on the Irish all-time list. He also reached the final of the 2011 European Junior Championships.

En route to the National title over 400m Hurdles

Thomas: Not a Problem! I first started with Ferrybank AC when I was about 8 years old. My parents were keen for myself and my two sisters, Jessie and Becky, to try out as many sports as possible when we were younger (I obviously enjoyed sports as well!). So I dabbled in soccer and GAA for a while, tried basketball and tennis, and played rugby for a number of years, all the while continuing with athletics. But in the end it seemed that athletics was the only sport for me, as I lost interest in the others!

Thomas: As I was a high jumper up until about 2 years ago, I always had a particular interest in Stefan Holm, the little Swedish high jumper. I was amazed, and still am, at the height he can jump, standing at less than 6 feet tall! I always remember the videos of him training, where he basically hurdles his own height, while I struggled to get over three quarters that height in any way I could! He just reminded me of a wound up toy. He would run in, build the tension, and then release it all to soar over the bar!

James: When did you realise that the long hurdles would be your strongest event?

Thomas:  Pretty much once I had tried every event and realised I was going nowhere with them anytime fast! I knew I would never be a short distance sprinter and however much I hated them at the time, the 400m was my strongest track event.

I remember my first ‘long’ hurdles race was in the County Schools probably 5 years ago. In the same competition I was gutted by my 6th place finish in the high jump, but I came out to win the 300m hurdles by flight of hurdles so from there I continued up to national level.

James: The 400m Hurdles comprises a unique blend of speed, endurance and technique. Which of these do you believe to be your greatest strength?

Thomas: It’s a tough one to pick really! Probably my technique is the strongest element with my speed being my least strong. I had competed in the short hurdles for a long time when I was younger with Ferrybank, so had a pretty good basic technique. This was then tuned and tweaked by my current coach in Limerick, Hayley Harrison, to bring my technique to the level it is at now!

James: This year you have made impressive progress and have knocked 6 seconds off your pre-2011 personal best. What have you done differently this season?

Thomas: There was a complete change in my lifestyle and training regimes. I finished with my leaving cert exams which pretty much drained me each day. I used to be in school 9am to 6pm, then straight to training, but now I have a couple of lectures a day and a bit of study and can slot in better quality training. The main reason though for my 6 second progression, is down to Hayley and Drew Harrison’s coaching throughout the year. I came to them as a raw school boy athlete, not knowing what a stride pattern even was, and they have managed to transform me in a year (no small feat seeing as I am quite stubborn). Hayley has been like my second mother when I am away from home, in fact I see her more than I would my own mum during the semester!

James: What one performance to date are you most proud of?

Thomas: It has to be the National Seniors in Santry. Never have I been on such a high in my life. To win was enough, a new PB was the icing on the cake, but to perform as well as I did in front of the home crowd, and more importantly my whole family (including Granny!), topped it all off.

James: What are your goals for 2012? How much is the Irish record in the back of your mind?

Thomas: First and foremost I want to enjoy the year! But competition-wise, I aim to go to and run well at the Europeans in Helsinki. It will be the biggest competition I have ever competed at, and I hope to use it as a stepping stone to get to an even bigger competition. As it will be such a high calibre race, it’s probably the best time for me to strive for the Olympic A Standard, which is my main performance goal (however scary it may be to me!). 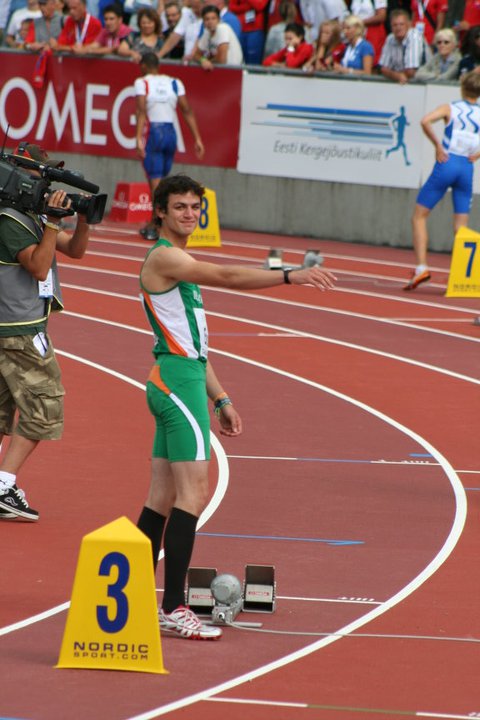 In relaxed mood at the European Juniors in Tallinn

Thomas: I love technical hurdling sessions, whereas on the other hand I really don’t like speed endurance sessions with long runs and short recoveries, but they have to be done I suppose!

James: What is the worst injury you have had to deal with to date?

Thomas: I got shin splints for the first time in May last year, and that set me back 5 weeks, and they played up a bit throughout the season (hence the compression socks) and are still threatening to come back at some sessions. So touch wood I won’t have to deal with them this year and that I’ll stay injury free for the year.

James: Nutrition obviously plays an important part in the life of an elite athlete. What would be your typical dieting habits in the lead up to a big race?

Thomas: To be honest I just keep a balanced diet. I don’t get caught up in my diet too much as it is pretty good as it stands. Coming up to a race, I just cut back on the treats I allow myself and keep it healthy as much as possible!

James: The depth of quality coming through in Ireland in the 400m Hurdles is particularly strong. How significant has the formation of the Irish Hurdlers Series been in raising the overall standard in the event?

Thomas: Jeremy Lyons has done very well in creating what is like a little hurdling community within Ireland! It’s great to see the series spurring on so much interest in what would always have been a minority event. Also updates in the blog/website are great for stirring up some (friendly) competition and for news and reviews

James: Your sister Jessie has also had a breakthrough year, running 56.62 in the 400m Hurdles, moving her up to fourth on the Irish all-time list. How much does it benefit you to have somebody so close to you also competing at a high level? Is there much competitiveness?

Thomas: Having Jessie on side really helps. She encourages me when I need it, and can criticise me and not feel bad (it’s all constructive of course…). It’s handy having her in the same event, because all her advice is relevant to me. It’s safe to say we are quite competitive with each other, always wanting to outdo each other! But its all just a bit of fun, for now….

James: What is your ultimate goal in athletics?

Thomas: To have fun and enjoy it all, otherwise it’s not worth it!

Thomas: Yes, I agree athletics is most of the time pushed to the background, unless there is a massive breakthrough or success from an Irish athlete. Rarely are there full articles written on a race, whether good or bad, whereas a rugby or football match could be spread across a double page. But then again I suppose athletics is an amateur sport while the others are professional sports with a lot of money being pumped into them. I would love to see a little more recognition for athletics because it involves just as much commitment, discipline and sacrifices by an athlete, as many of the professional sports.

James: What are your views on athletes with B-Standards not being sent to the Olympic Games?

Thomas: I don’t really agree with it at all. The fact that it is as close to our home Olympics as we will probably ever get, is enough to justify sending B-Standard athletes. There is less cost, no time changes and very little climate change for athletes competing in London. Weren’t foreign teams going to set up climatising camps in Ireland? We wouldn’t need to even climatise for London; we’ve grown up in this weather!!

Thomas: Yeah I love watching it, especially the big events. At the moment I suppose I would have to say Usain Bolt. We don’t know what surprise he’s going to unleash, or record he’s going to break next. He’s so laid back and relaxed before massive races it’s crazy! He’s a pure showman and is there to please the crowd and I admire him for that, it would be no fun if all the athletes on the start and finish line were to be deadly serious and have no interaction with the crowd.

James: That’s great Thomas. Thank you for your time and the very best of luck in 2012.

Thomas: Thanks James, and a successful 2012 to you too!