James Sullivan is back with another Q&A, this time with Irish middle distance runner Thomas Chamney, 3rd on the Irish all-time list for 800m.

James: Thank you for taking the time to talk to The Running Review. Easy question first, how did you first get involved in athletics?

Thomas: Not really. I suppose I followed the Irish middle distance runners of the time, Niall Bruton, Dave Matthews and James Nolan. Also, Sonia was in her pomp then so I would’ve had good time for her when she was on the telly.

James: You attended Notre Dame on an athletics scholarship from 2002-2007. How would you describe your time there? What were the positives and negatives of living in the USA and competing on the NCAA circuit?

Thomas: It’d take me too long. The coach was a bit of a knob, they raced me too much, training was ridiculously hard but the education was first class and the facilities were unreal and I went from being a nobody to running 1:46. I’d go again in a heartbeat if I could. Best decision I ever made.

James: What one moment in your career to date are you most proud of?

Thomas: I can’t really say I’m proud of anything I’ve achieved because let’s face it, I haven’t done much. I suppose coming 3rd at the Bislett Games is the best thing I ever did on the track. That and getting All-American 3 times over at Notre Dame.

James: What would you describe as the most disappointing moment in your athletics career? What positives have you taken from it?

Thomas: Running shit at the European Championships in Barcelona. I haven’t taken any positives from it, it mentally and physically broke me and I’m still trying to recover from it. 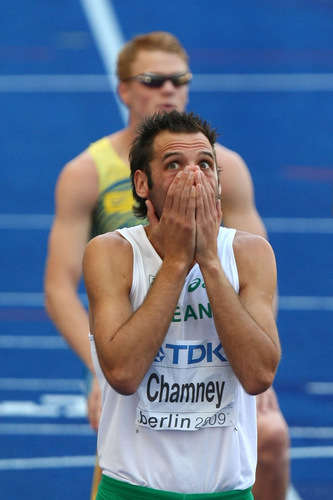 At the 2009 World Championships in Berlin

James: Since the Barcelona European Championships in 2010 you have struggled with injury problems. Can you explain what has happened over the last year or so? How challenging has this period of time been?

Thomas: In November 2010 I developed a dull ache in my stomach as well as a pain in my groin simultaneously. I had an MRI that revealed oestitis pubis. I had a cortisone injection into my pubic bone and took off until the end of January. Upon resuming training the dull ache in my stomach gradually became worse and worse and then spread from the left side to the right side. In April, having been assured by Irish doctors that I had ‘torn fascia’ I took matters into my own hands and went to Germany for a second opinion where I was told I had a 6 centimetre defect in my abdominal wall on the left and a 4 centimetre defect on the right and had surgery the next day to fix it. The stress of all that caused me to develop chronic fatigue syndrome which saw me feeling like death in training from June until Sept (at one point I ran 1 mile in 7:20 with a heartrate of 184) when I decided to quit running altogether. By December I decided I should just try jogging every second day. Gradually I got back into it only to damage my ankle in January 2012 and have to go again to Germany to see Dr. Muller Wolfhardt for treatment. And so, since March 1st I’ve been relatively healthy and training away.

James: Where do you feel you are at this moment with regards to getting back to your best? What are your goals in the short/ medium term?

Thomas: I am probably about 2-3month away from getting back to my best. My only goal is to prove certain people wrong about me and I will be relentless in pursuing this and making a fool of them. Realistically it will be 2013 before you see me back being competitive in an international sense.

James: With regards speed work, what do you consider to be the key sessions for an 800m runner?

James: How important is core strength work for an 800/1500m runner and how much emphasis do you put on it? What specific core strength exercises do you incorporate into your training?

Thomas: I do core work, but mainly to look good naked for the missus.

James: In the past you have spent some time training in Spain. How did you find their setup compared to how things are approached back home?

Thomas: They make the Irish set up look like a joke. But that’s easy when athletics receives the attention and respect it deserves from both the media, sponsors and the general public. There’s no GAA in Spain to fill people’s head with foolish ideas.

James: Do you feel athletics in Ireland gets its fair share of funding or can more be done to help the sport develop?

Thomas: Athletics needs to stand on it’s own two feet and move away from receiving the bulk of its money from the Sports Council. That way they can operate without undue influence from the bureaucrats. To do this they need corporate money and lots of it…which will never happen because the GAA sucks all that up….oh the pipedreams.

Thomas: Most people in the media never competed in athletics so they haven’t a clue about the time and work it takes to get to a high level. And of course, they are under the kosh from editors who want stories that will grab headlines, hence so much negativity. And when you factor in that they are working in an industry (print media) that is dying a death by a thousand cuts and they’ll do anything to make a sale it’s easy to see that all aspects of the media, be in athletics or news in general, is biased one way or the other. They’re just trying to feed themselves so I don’t pay too much attention to anything they say.

James: There have been no Irish broadcasters at the past two World Championships. What can be done to help the sport gain more media exposure in Ireland?

Thomas: In the current climate, not much. RTE is insolvent and TV3 is clinging on so who’s going to pay to put the coverage on? It costs a lot of money to show a track meet on TV. What I’d love to see is someone setting up an Irish version of flotrack, with a high production quality, take the sport back and give it the coverage we, the supporters and athletes want. We’ve got a few people standing on the side of the track with a camera right now, but I’m talking more than that. I’m talking Irish people taking the thing by the balls and making a website with high design quality, commentary during races and proper interviews. Alas, no one has done it yet…but there’s a business there for someone if they’d only take the first step. Charge races 200 euro a race to show the thing, charge sponsors advertising to show their commercials, all that. Money money money baby.

James: What are your views on drug taking in athletics? Have you ever suspected a competitor? How do you deal with the frustration that some opponents may not be playing by the rules?

Thomas: Drugs are drugs, they’re out there and people use ‘em. I’m not frustrated because let’s face it, it’s never cost me a medal or anything. I used to care but to be honest, I couldn’t give a toss if lads are injecting EPO into their eyeballs anymore. They’ll be dead when they’re fifty so in the end they’ll pay a price.

James: In Ireland, could more be done to get the regular Joe Soap, regardless of age or ability, onto the track rather than having a disproportionate number of participants in our sport competing in road races, fun runs and marathons? Should track running be made more accessible to the everyday runner, and if so, how can this be done?

Thomas: Can’t be done. You gotta milk the road races because the average jogger will never give a toss about running on the track. Who wants to show up at a graded meet weighing about 22 stone and getting milled by lads. Leave ‘em off I say.

James: You are the president of the IAAF for one day. What drastic changes do you make?

Thomas: Shut the thing down, sell off all the assets, embezzle all the money and retire to a beach somewhere.

Thomas: I don’t watch athletics that much anymore. When I do I usually get frustrated watching people I used to beat running huge PBs and fast times. I suppose I watch the Irish now, Mad Len is a good lad to watch so he’s my favourite now.

James: That’s great Thomas. Thank you for your time and the very best of luck this coming year.

Keep up to date with Thomas Chamney’s progress through his official website.