There were mixed emotions for Ireland’s Kelly Proper after this evening’s 200m semi-finals at the European Championships in Zurich. The Waterford woman clocked a new personal best of 23.15 in finishing fifth in the first of two semi-finals, bettering her previous mark by one hundredth of a second. However, it was not enough to secure qualification for tomorrow’s final, as she finished the event ranked in eleventh place.

“It’s bittersweet,” remarked Proper afterwards. “On one hand I’m disappointed as I think I was good enough to be in the final. But on the other hand I am delighted, I feel good about it, I couldn’t have done anymore. I think I would have loved to have gotten a bigger personal best and be in the final tomorrow and I think it was there for the taking.” 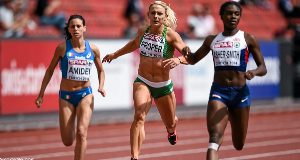 Despite her frustrations, the old saying, that any day one runs a PB is a good day, is not lost on the 26 year old. “I performed on the day, faster than I have ever run before. I get really annoyed watching the television when people say they’re annoyed when they get a PB, so I’m not going to be one of those.”

“My coach said to me, if you run a PB, you’ll be in that final. I’m going to kill him now,” joked Proper.

The multiple national champion eluded to an error she made in the middle portion of this evening’s race, but refuses to use her unfortunate lane draw as an excuse for this. “There were a couple of metres in the middle that I didn’t really drive through and I should have kept accelerating. If I was in any other lane I don’t think I would have run faster if I made the same mistake that I made this evening from lane eight.”

However, the Ferrybank AC athlete admitted that the outside lane doesn’t suit her style and that she would have preferred an inside lane. “This morning I went out, tried my best, but if I had run faster I would have been in a better lane this evening, so it was my fault I was stuck out in lane eight. In lane eight you’re running scared. I like to chase people. I’d almost prefer lane two to lane eight, even though a lot of people would say the opposite, but I like to chase people. It’s the same in training, I go on the inside lanes to chase people.”

Looking ahead to next season, the national long jump and heptathlon record holder is under no illusions as to where she needs to improve to make the jump to the next level. “I think I need to work on my speed. If you look at some of the best 200m runners like Dafne Schippers, they’re all running 11.0 for 100m, I’m running 11.6. I think 11.6 does not reflect my speed right now. I think I am faster than that. But I need to be getting it down two tenths.”

Earlier today, Proper had qualified for the semi-final with a 23.37 clocking in her first round heat, and the highly versatile athlete will leave Zurich with nothing but fond memories from such a busy day of competition. “To be honest, I really enjoyed today. It was probably my most enjoyable athletics day ever because when I had to do something I did it.”

Next up for Proper is the 4x100m relay on Saturday, and after that she has no intention of ending her season just yet. “I’ll see if I can get another race because I’d hate to waste the good form right now.”