Disappointed Britton looks towards marathon, as English advances with ease

There was disappointment for Ireland’s Fionnuala Britton in the final of the women’s 10000 metres at the European Championships in Zurich this evening. The Kilcoole AC runner finished in eight place, in a time of 32:32.45, in a slow tactical race won by forty year old British runner Jo Pavey.

“I don’t think I ran with enough confidence in that race,” remarked the two-time European Cross-Country champion afterwards. “I wanted a medal out of that and I didn’t run that like I was running for a medal. I was there at the point that I needed to be, and I was there when the move was made, and at 2K to go I was thinking now I just need to stick with these and I’ll get a medal out of it and then all of a sudden it was gone.”

The thirty year old, who finished fourth in the same event at the previous European Championships in Helsinki two years ago found herself dangerously close to the back of the main pack for much of the race. However none of her competitors were willing to make a move from a long way out, and the race was reduced to a long sprint for home in the closing few laps, with Britton gradually forcing her way back into contention.

“It was kind of strange as the people who were controlling at the front were the people who have kicks, so in a way I didn’t really think that somebody was going to make a big move and go for it from way out. The longer it went on the safer you were because it was always going to be a burn up then at the end. So unless I was going to take it on myself from three miles out it then I don’t think anybody else was really going to do it.” 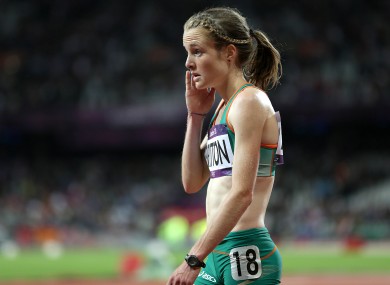 Britton, who has become known as a front runner, chose not to adopt the tactics which has led to much success over the cross-country in recent years. “I suppose you can’t run all your races the same. You’re running against the same girls all the time and if you do the same tactic all the time then they know what you’re doing too.”

Britton, will now turn her attention to the marathon on Saturday morning, and shined some more light on her curious decision to make her debut over the iconic 26.2 mile distance with such short notice.

“As the season went on I realised I was getting into shape. It was me that asked. It was pretty close to a last minute decision really. I suppose in a way the marathon excites me a lot more than the 5K so I thought why not ask, and if it works out it will be a really good experience. I think with only two years to go to Rio, which is what I am hoping to do then, it is important to get championship experience in now rather than having to go to Beijing next year for Worlds.”

However the Wicklow native is unsure whether she believes she can challenge for a medal on Saturday. “I really honestly don’t know. I don’t know how I could know. There’s a world silver medallist in the field. It’s not like it’s easy.”

Earlier this evening there was a more positive outcome for Mark English, who qualified with ease for tomorrow’s semi-finals of the men’s 800 metres. The 21 year old won heat two in a time of 1:47.38, with Great Britain’s Andrew Osagie, finalist at the 2012 London Olympics, failing to qualify, back in fifth place.

“I got sheltered all the way to 600,” reflected a very content English. “I passed Osagie, felt so fresh and put about ten metres on him. I’ve never felt that good, so it’s looking good for tomorrow. I think there was a lot more in the tank in that final 200. I’d say out of six gears I was in fourth or fifth. To pass an Olympic finalist with such speed and acceleration was a good confidence booster.”

The 21 year old Donegal native, who now runs for UCD, sat comfortably behind the leaders for much of the race, before making his move with 200 metres remaining, claiming the lead, and holding off Poland’s Artur Kuciapski in second place comfortably, visibly easing off at the end.

“It’s not really rocket science. You just try to stay as close to the lead as possible. If you can get sheltered that’s a plus as well and I think I did those two things today and that gap opened for me with 220 to go which always helps. The guy who was right beside me, I knew he’d fall back as he wasn’t at the same standard as the rest of us, so it all worked out nicely.”

English, who finished fifth in the 2012 World Junior Championships, believes his disappointing performance at the World Championships in Moscow last year has helped with his development as a championship runner. “I don’t think you’re ever going to run perfectly in your first senior international race. I’m getting better at every senior race I’ve competed in since that and I think it’s shown out there today.”

There was less fortune for his compatriot Declan Murray who failed to qualify from heat three this evening. The American born athlete finished in seventh place in his debut major championship, with a clocking of 1:50.01, well behind race winner Adam Kszczot of Poland (1:47.92). The 23 year old made all the right moves throughout the race, and positioned himself well, but simply had nothing left in the legs come the finishing straight, hindered by a trip late on.

“I think had I not gotten tripped up I probably would have been good through about 750 and then it would have been down to the adrenaline trying to hold off a few guys, but definitely it could just be that I’m coming to the end of the season and not having enough in the legs the last 100m. In early June I felt like every race I was able to finish off with 12.5 for the last 100, so I could just be a bit more tired than I thought I was.”