English squeezes through as Barr comes up short

There were mixed fortunes for Ireland’s leading track medal hopes at the European Championships in Zurich this evening. Mark English progressed to Friday evening’s 800m final, but Thomas Barr failed to advance from the semi-finals of the 400m hurdles.

English, who cruised to victory in his first round heat, found the level of competition tougher this evening, finishing fourth in the first of two semi-finals, outside the first three automatic qualification places. However, his clocking of 1:46.23 was sufficient to secure himself a berth in the final as the first of the two fastest losers.

“Obviously I would have finished top three if I could, you can’t hide that,” stated a satisfied English afterwards. “But I knew when I came across and I saw my time flash up on the screen that I had a very good chance of making it in as a fastest loser.” 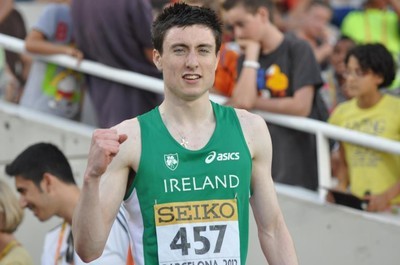 The 21 year old applied sensible tactics from the outset, tracking eventual winner, Pierre-Ambroise Bosse of France, throughout the race, but tired in the final fifty metres and was passed by both Artur Kuciapski of Poland, and Denmark’s Andrew Bube in the dying stages. “I ran pretty much according to how I planned it. I knew it would go out fast and I knew Bosse wouldn’t let it go slow, so my aim was just to stay in lane one and make sure nobody came by me. I tied up a bit in the home straight.”

Despite having to rely on qualifying as a fastest loser, the Donegal man insists that he is very pleased with the result and says he doesn’t feel much pressure now ahead of the fight for medals on Friday.  “I’m just delighted. It’s my first senior final and that was my main aim, so I’m not going to complain. To get over the stress that I felt and the nerves that I felt going out there, I’ve never felt nervous like that no matter what I’ve done in my life. So I’m just delighted to get through and I’ll take it as it comes in the final. The stress is gone now that I’ve qualified and maybe the expectations are lowered from other people, so I’m just going to go out there and enjoy it and execute my plan as best I can.”

Looking ahead to Friday’s final, the Irish champion doesn’t believe that his 46 second 400m speed will give him much of an advantage in the event of a slow first lap. “Everyone’s got their own attributes from the speed side or the endurance side. Bube himself has run 46 seconds for 400, but you’ve got a guy in that race, Lopez, he’s run 46.7 or 46.8 for 400 and he went out the back door. It just shows you that these things are so cut throat and that’s why I’m so relieved at the moment to get through.”

There was less fortune for Thomas Barr, who finished third in the second of three semi-finals of the 400m hurdles, recording a time of 49.30, which was not sufficient to qualify for Friday’s final as one of the two fastest losers.

“I did expect that I should have been in the final,” remarked a disappointed Barr. “It’s below my own expectations and I know it’s below a lot of people’s expectations. My aim today was to come out and win it, and if not, then come out and get a close second to get a good lane for the final, but unfortunately it just didn’t pan out that way.”

The 22 year old was considerably down on his main rivals entering the home straight, and despite a strong and determined finish, he left himself too much ground to overcome, eventually being edged out of the second automatic qualification spot by World Championship bronze medallist, Emir Bekric of Serbia.

“I just didn’t have it in me on the day. I suppose that’s the way the event has gone. There’s so much depth in the 400m hurdles that you make one little slip up and it can be costly, especially on a day when there’s three semi-finals, and there’s only two to qualify automatically. Even if I did qualify I would have had lane one or eight with a fastest loser spot, so going into the final my head wouldn’t have been in a good spot.”

Barr remarked that he didn’t quite have the same energy today as he had yesterday, and that the challenge of running rounds is still something which he finds difficult to prepare for. “In training we can do tough sessions day after day, and simulate it that way, but during the season I did a couple of races within one or two days of each other. That’s one way of getting simulation in, but other than that it’s just making sure you have the endurance and you have the speed to get through the first round without too much hassle. Then today I should have been able to go out as hard as I could, which I did on the day, but it just wasn’t there. Preparing for rounds, it’s something tough to do but it’s one of those things you have just got to get used to for championships.”