There was success for Ireland’s sole representative on the second morning of the European Championships in Zurich. Christine McMahon gained automatic qualification for tomorrow evening’s semi-finals of the women’s 400m hurdles with a clocking of 57.16 seconds, less than two tenths off her personal best, to finish in third place in heat two.

“I’m delighted with the performance,” stated a visibly delighted McMahon afterwards. “I would have liked the time to be a bit quicker, and I think it could have been a PB if I didn’t have to do a wee detour in the last forty. It was a wee bit wet but I didn’t feel that when I was running. It was slightly windy down the back straight but if anything that actually suits me as I prefer it to be there than in the home straight.” 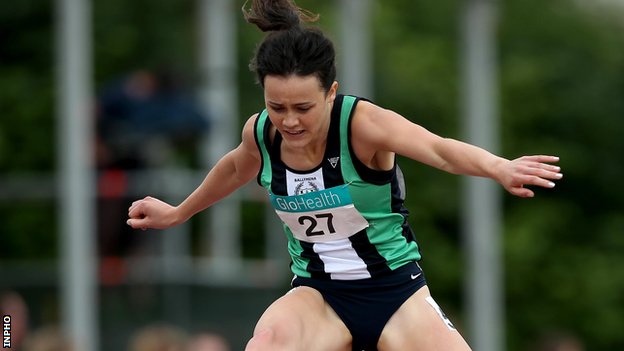 The 22 year old was involved in a highly eventful heat, with Denmark’s Sara Petersen being disqualified for a false start, while Ukraine’s Hanna Ryzhykova tripped before the final hurdle, falling into McMahon’s lane, causing the Ballymena & Antrim AC runner to have to side step to avoid clashing with her.

“There’s ten things in your lane usually so what’s one other thing,” joked McMahon. “You’re used to people clattering hurdles, and maybe a false start, but not having a false start, somebody hitting a hurdle and fall in your lane all in the same race.”

The recently crowned national champion had a disappointing performance at last month’s Commonwealth Games, where she exited the competition in the heats with a lacklustre 58.67 seconds, but maintains her below par showing in Glasgow has helped her develop as an athlete, in such a short space of time. “I feel in great shape now. Glasgow, as much as it was a disappointing performance, I learnt so much from it and now I’m a lot more confident, especially on that top bend which is where I made the mistake last month.”

With her main goal for this week already achieved, the major championship debutant still has high expectations of herself ahead of the semi-finals. “I’d be delighted with a PB. Just to come off and say that’s the best I could do. If it doesn’t make a final then that’s understandable, as I know I’ve got a few more years to get to that stage, which is where I plan to be eventually.”