James Sullivan was in Moscow for last month’s World Championships and gives his own three-part personal review of the event. In the first part he provides an insight into life working in the media, the stern Russian security guards and the friendly volunteers.

Having already spectated at the European Championships in Barcelona in 2010, the World Championships in Daegu, South Korea the following year, and the London Olympics in 2012, the thought of missing out on the next congregation of the world’s finest athletes, in a city forever on my bucket list of travel destinations, was simply not entertained. Flights and tickets were booked and I was ready to experience it all again. Then, on a balmy March evening in Melbourne, as I sat in a charming Irish pub, listening to a trad session, while sipping on a few adequately poured pints of Guinness, an idea was born. A friend of mine, seated on the other end of the table, planted the seed. “Why don’t you apply for a media pass?” The thought had never crossed my mind and at first the pure notion of it seemed ridiculous. Sure isn’t media accreditation for those lads you see on the TV, working for RTE television, and the major Irish newspapers? Wouldn’t they be requiring this ahead of somebody like myself? The more I thought about my friend’s suggestion the more valid it seemed and it wasn’t long before I was 100% committed to the plan. A couple of months later my application was approved by the IAAF and I was ready to embark on the adventure of a lifetime, a glimpse at one of the world’s greatest sporting events, in the historical city of Moscow, from the best seat in the house.

The life of a Tsar 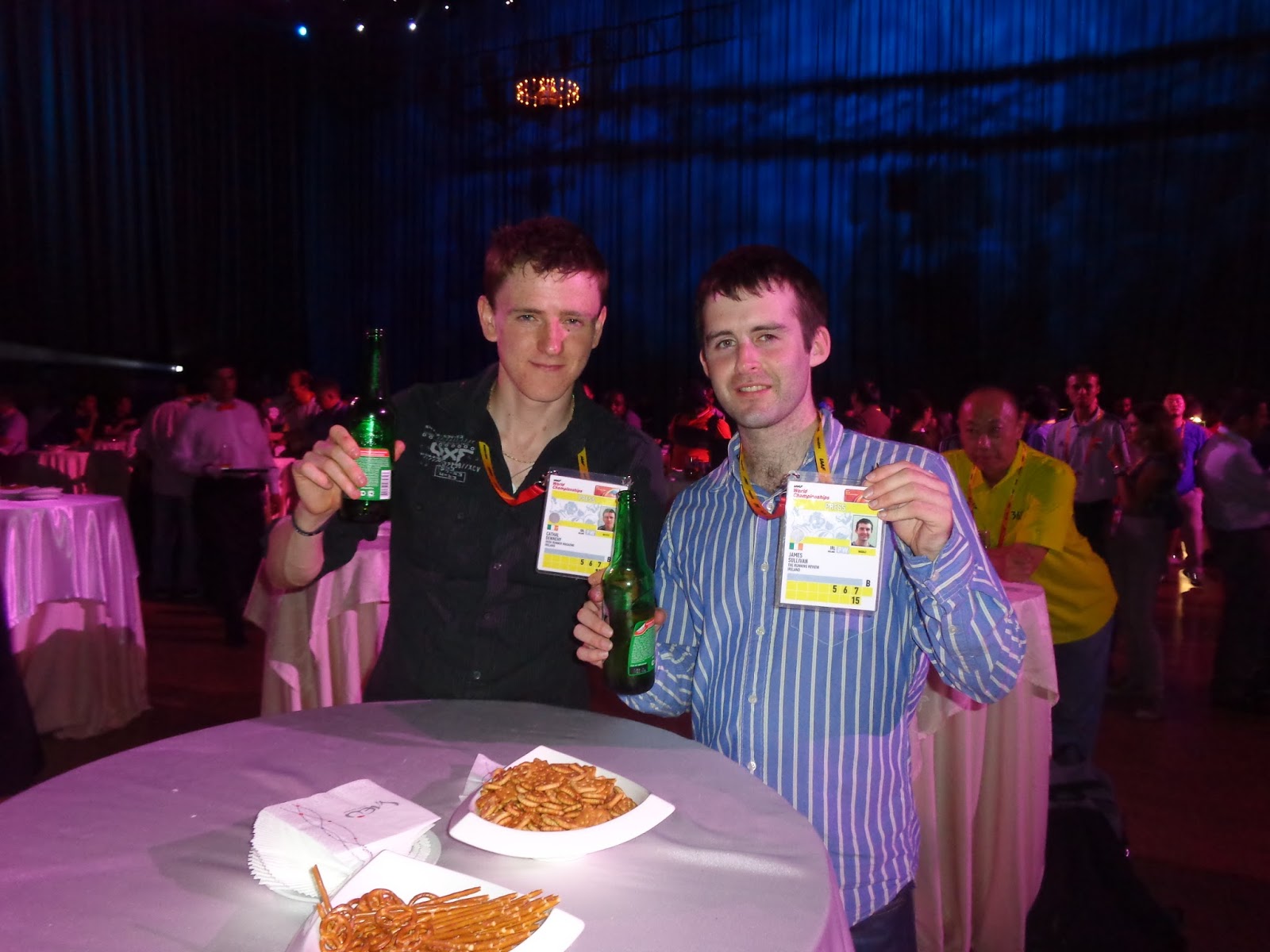 From the moment we set foot inside the Luzhniki complex, the site of the 1980 Olympic Games, myself, and a fellow Irish journalist, Cathal Dennehy, were given the full tsar treatment. Following the short and pain free process of signing in and receiving our accreditation badges, which would allow us access to certain areas of the venue throughout the championships, we were provided with a rake of free paraphernalia; a public transport pass, a bag, championship programmes, a statistics book, and an invitation to the media party taking place that evening. Never the type to reject the offer of free grub and booze, we spent a thoroughly enjoyable evening drinking and discussing athletics with journalists from all over the world, with much good natured trash talking about who would claim more medals. It was the eve of the championships and excitement was really starting to build. I arrived as a journalist, but had no intention of forgetting my roots as a fan.

The media setup was top notch. For starters, the accreditation badge allowed one to sit anywhere in the general spectator section of the stadium, which resulted in several nights spent seated in the sixth row, a mere four metres from the finish line, as the world’s fastest, strongest and most durable whizzed past. As we witnessed Jamaica’s Usain Bolt crush his competitors yet again in the men’s 100m, I couldn’t help but cast my mind back to the London Olympics last year, and the fact that there were many people who took out a small mortgage to witness the same race involving a similar line-up. You would need to be stone mad not to take advantage of perks like these.

Getting down to business

In addition to the above, the organising committee did many things so well to ensure that members of the media could work efficiently, effectively and in a timely manner. Inside the stadium, overlooking the finish line, there were countless media workstations. These contained two screens; one with a touch feature providing start lists, results, summaries, medal tables and every other piece of statistical heaven which sporting anoraks like myself thrive upon, while the other contained several television channels, allowing me to watch whatever event I wished, a sort of red button type feature. This was a godsend as some of the field events were taking place on the other side of the stadium and therefore were out of natural view for even those with twenty twenty vision. Furthermore, within barely three minutes of a race concluding, the eager volunteers would provide you with a print out of the results. Then there was the mixed zone, where athletes of varying emotions would pass through in the immediate aftermath of the conclusion of their race or event, providing an opportunity to nab some interviews, quotes and anecdotes. Close by was the press conference room, where the medallists in each event would congregate afterwards, allowing an opportunity to fire questions at the interviewees in a public environment. Meanwhile, over in the main media centre, there contained numerous top of the range personal computers, quality printers, high speed internet, along with WiFi. You only had to shuffle from your seat a mere ten metres and you had access to pigeon holes filled with race results, start lists, previews, interview quotes, you name it. Never in my life have all the tools required to do a job been so readily available to me.

This is not to say there weren’t some flaws when it came to the organisation of this event. At the last World Championships, in South Korea, I was won over by the polite manner, friendliness and pure innocence of the people working on security. Granted they weren’t the most effective at their appointed roles, and I regularly gained access to the athletes section of the stadium with remarkable ease, but there existed a laid back attitude and atmosphere, which provided a pleasant experience for all parties involved. The men working on security in Moscow on the other hand were more akin to the type you would expect to find on guard outside the Kremlin or any other political institution, a casual throwback to communist times. 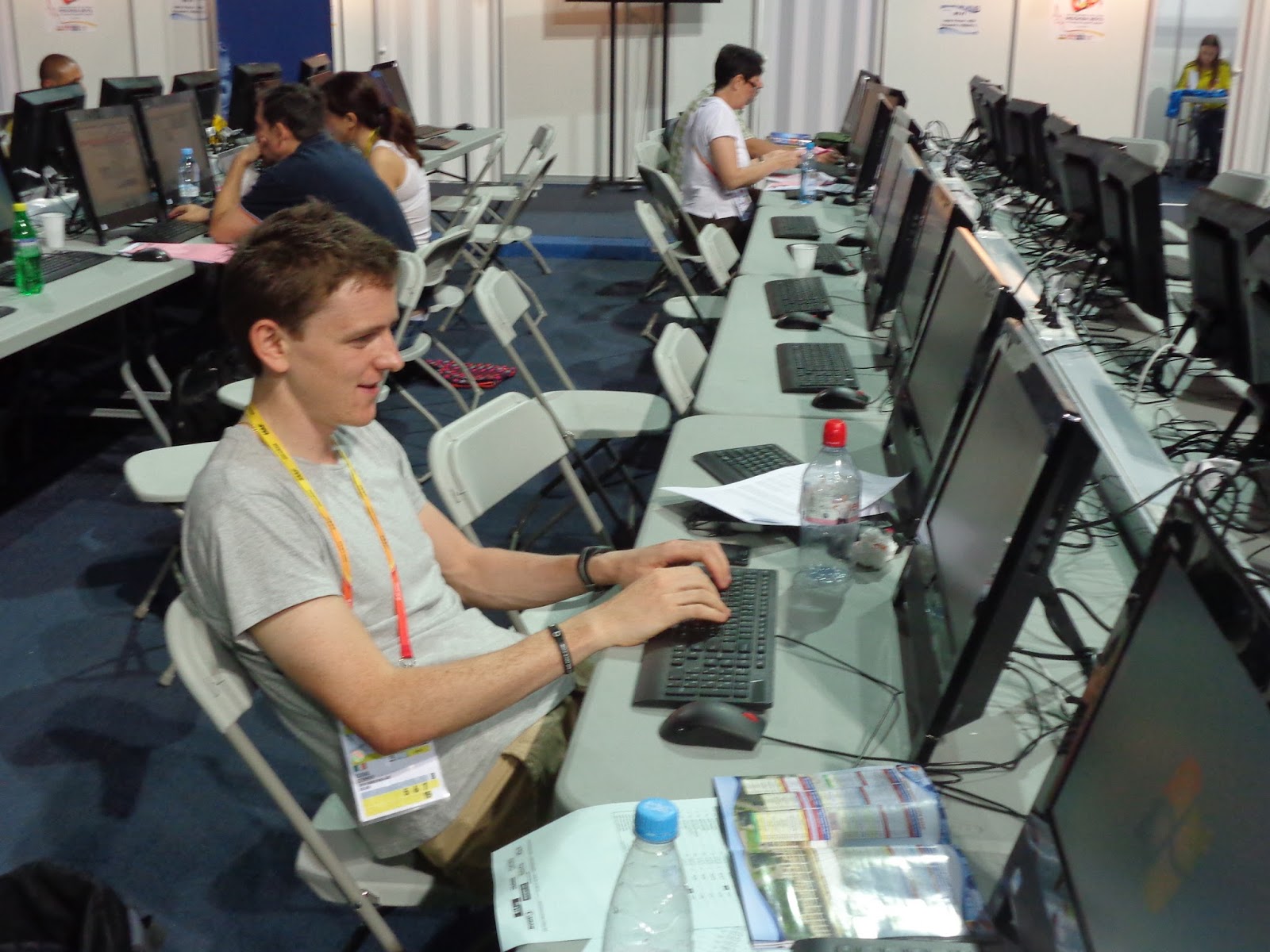 Hard at work in the main media centre

My accreditation badge only allowed access to certain areas, and through specific entrances, and by God, were those security guards going to enforce things to the extreme letter of the law, with ruthless, unforgiving and intimidating efficiency. The media area of the stadium was poorly signposted, which meant we spent the first three days of the event consistently lost, unable to find our way to the mixed zone, press conference area, media work stations, and any other location which required our attendance.

“Please sir, I just need to go through that gate to get into my seat” I uttered, trying to reason with a guard who had a face as long as Chile. “Nyet, Nyet” he muttered, his cheek muscles physically unable to lift upwards. Nyet, a word we would hear on at least twenty dozen occasions throughout the championships, as the security guards threw logic out the window and enforced a level of red tape, so unnecessary and complex, it would break a man on the brink. “I am supposed to be in that section, please just let me through that gate now and it will all be good” I pleaded while pointing furiously, albeit in great vein, sadly aware of his complete lack of any English vocabulary. He responded by crossing his arms, forming an X sign, and literally pushed me back, throwing around a bunch of hand gestures indicating that I needed to travel the scenic route to gain access to my appointed spot. But of course. This is Russia, a fascinating place where things are made more complex for the pure sake of it. Eventually I found out the problem at hand. I had accidently entered an area I was not supposed to have access to, the photographers section. Rather than let me correct this error swiftly and allow me out the exit gate into the section I was supposed to be in, he sent me on a journey down steps, under tunnels, up more stairs, across hall ways, through press rooms, and up one final flight. It did not matter that this was clinically insane, pointless and a waste of my time, there was apparently only one entrance by which I was entitled to enter through, and he was not budging from these convoluted rules. This is just one example of the astonishing levels of bureaucracy we encountered all week, resulting in a grade of effort unprecedented for such trivial matters. 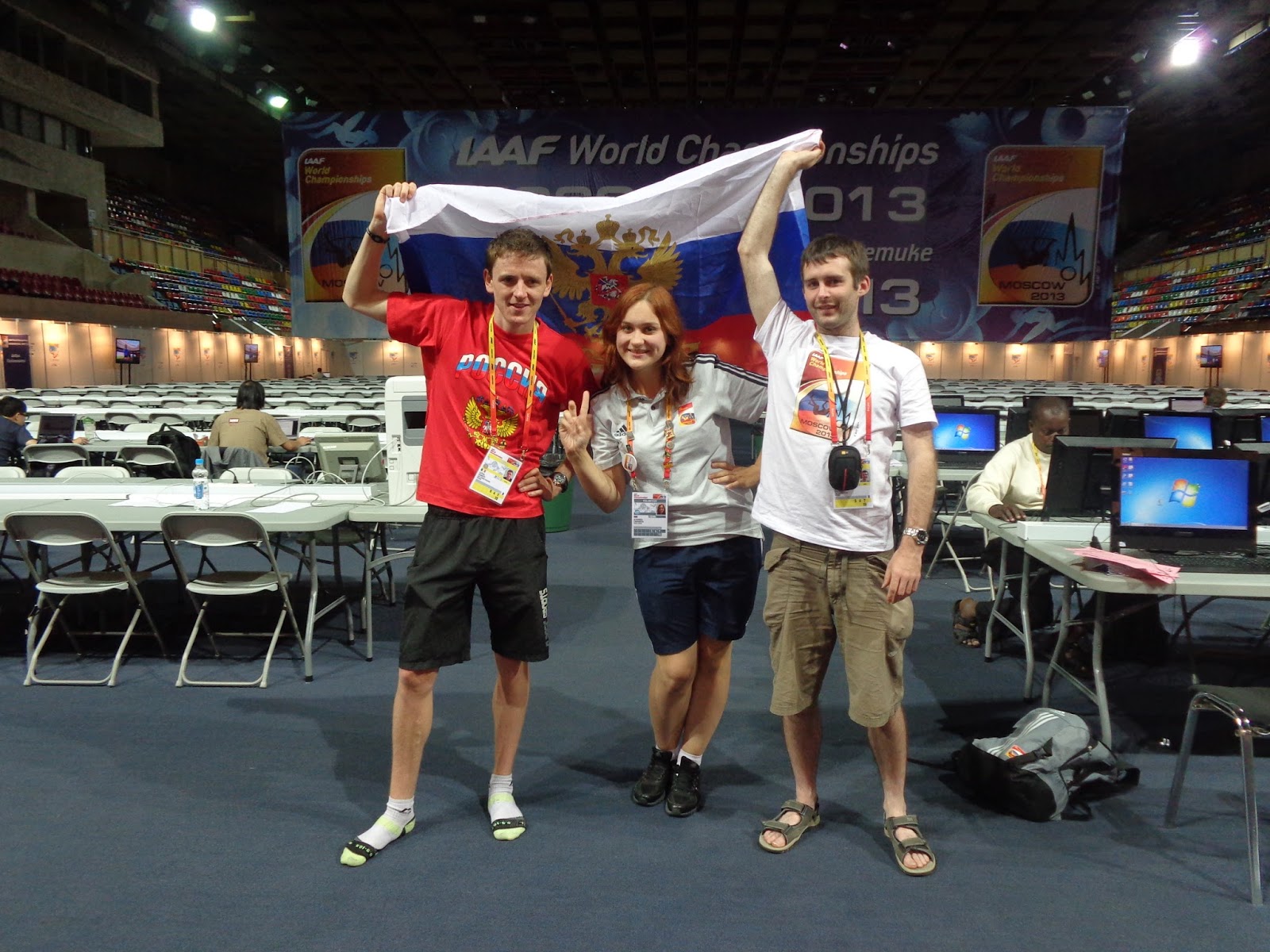 With one of the many cheerful volunteers

It would have been easy to stereotype the Russian people based on these grim and harsh soldier-like creatures, and indeed Usain Bolt made multiple references throughout the week about how he believed the local people were far too serious and didn’t smile enough. However, having interacted with countless Russian people, both inside and outside the confines of the Luzhniki complex, I can gladly say that the world’s fastest human is completely incorrect in his judgments. The Russian people proved to be extremely helpful, pleasant and friendly, were great fun to be around, and yes, they did smile, a lot. Nobody displayed this underrated likeability and charm better than the championship volunteers, who consistently went above and beyond to ensure we had everything we required. One particular moment which will long stick in the memory was when the two of us finished up working quite late, with the clock ticking dangerously towards 1pm, and the closure of the Moscow metro. Not only did two female volunteers call us a taxi, but in addition walked with us for twenty minutes to ensure we reached our pick-up spot safely and painlessly. You simply do not forget kind gestures like that, a bench mark to which all countries and sporting events should aspire to.

This is part 1 of James’ review. Check out part 2 and part 3