James Sullivan was in Moscow for last month’s World Championships and gives his own personal review of the event. In this second of three parts, he shares his experience of watching Robert Heffernan claim gold for Ireland, giving an insight into the aftermath in the mixed zone and press conferences, along with the celebrations that evening, and speaks about the lack of national Irish media coverage in Moscow. 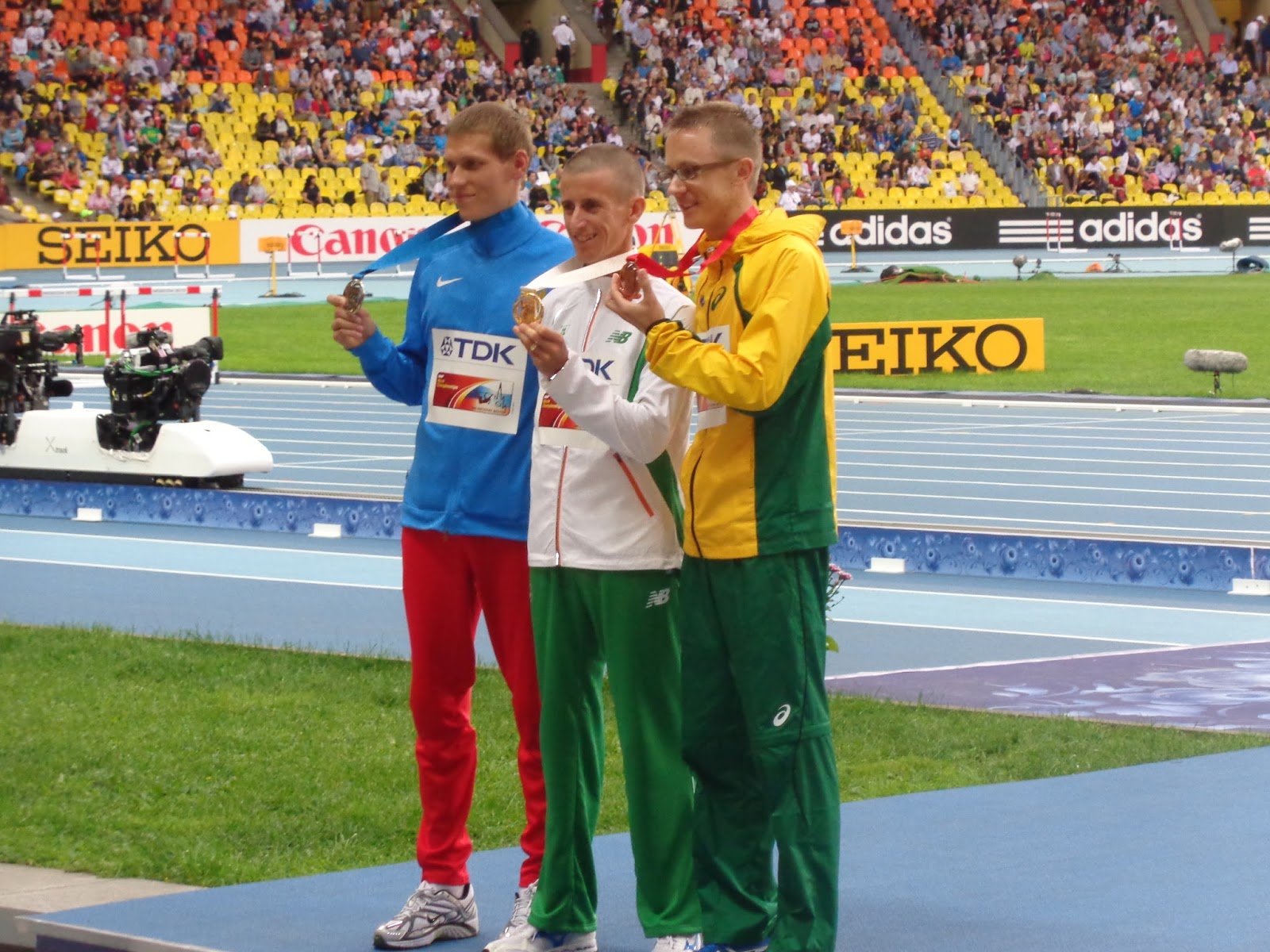 Despite all the perks that go with working in the media at one of the world’s great sporting events, what makes a championship truly memorable are the performances of the athletes themselves, and from an Irish point of view there was none more outstanding than that of Cork’s Robert Heffernan.  Having suffered a plethora of near misses in major championships, namely fourth places finishes in both the 20km and 50km race walks at the 2010 European Championships in Barcelona and again at the London Olympics last year over the longer distance, the 35 year old finally claimed the medal that had eluded him, winning gold in the men’s 50km walk, becoming only the third world champion from the Emerald Isle, following Eamonn Coghlan in 1983 and the legendary Sonia O’Sullivan in 1995. The result was immense, just reward for almost two decades of hard graft. The experience surrounding the event, however, was on another level. While the support along the two kilometre loop, which Heffernan had to negotiate on no less than twenty-four occasions, was never going to be near that of London last year, there were nonetheless a decent sprinkling of Irish supporters stretched along the course, slowly damaging their vocal chords over the extended period of time that is required when your athlete is competing in the longest event on the championship programme. At the half way mark, as the early leaders dropped back, I muttered to myself inaudibly that the Togher AC athlete had the victory on the tip of his finger nails. While one never wants to tempt faith, he looked so incredibly comfortable while those around him faded in rising temperatures. With less than two kilometres remaining and a historic victory all but guaranteed, a group of us began a mad dash for the stadium, desperate to make it inside and not to miss the crowning moment. The security guards did their best to slow this transition as much as they could, but fortunately I took my place by the finish line with a few minutes to spare, ready to soak in a moment of glory so rare to supporters from such a small country.

The immediate aftermath was chaotic for Heffernan as he was inundated with interviews, no doubt being asked the exact same questions by each reporter. Despite all this, the charismatic Corkman spent a solid ten minutes talking to myself and Cathal, providing an unprecedented level of banter, comedy and anecdotes. I struggle to think of a more likeable Irish sporting hero, and with the outspoken personality he possesses together with his extraordinary success, I really believe that he has the potential to become a genuine superstar back home, in a market dominated by GAA, football and rugby players. Shortly afterwards, he was seated in the winners chair at the press conference, looking bemused at such a new experience, being fired dozens of questions from overjoyed Irish journalists, who in no uncertain terms took over the public discussion. One had to feel slightly sorry for Jarrod Tallent of Australia, who despite having achieved yet another major medal, was not queried once. This moment was all about one man. 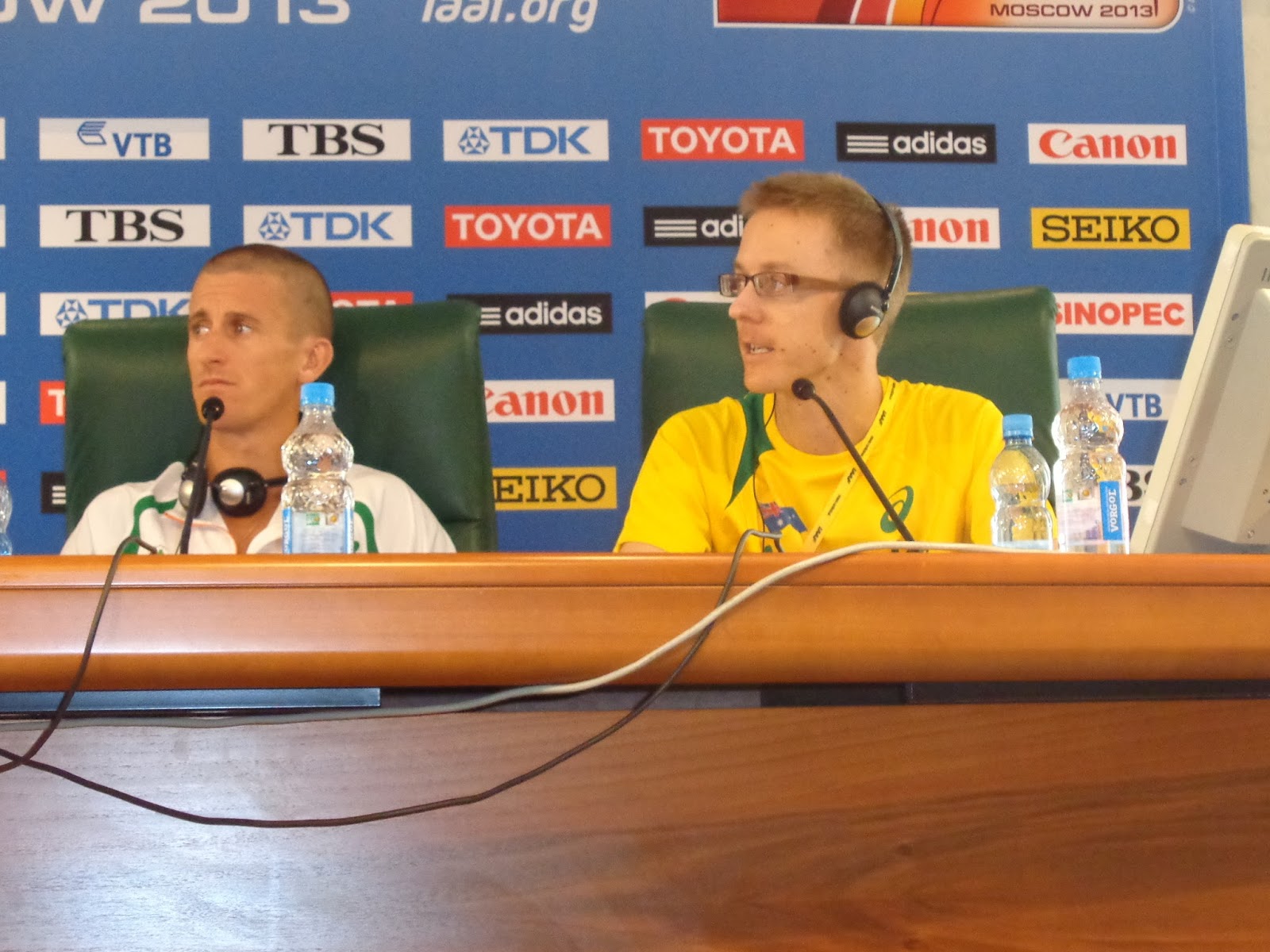 Robert Heffernan with Jarrod Tallent in the press conference afterwards

Well documented at this stage, Ireland’s main broadcaster, RTE opted not to cover the World Championships, leaving the country one of the only in Europe without national television presence inside the Luzhniki Stadium, an embarrassing, yet recurring, and sadly unsurprising theme. Anybody with the smallest knowledge of the sport knew that Robert Heffernan was going to be at the business end of proceedings come the championships and it is astonishing that RTE lacked the foresight to, at the very least, purchase the rights to his particular race, like what the broadcaster did in 2003 when only Sonia O’Sullivan’s 5000m final was aired. In addition, not one of the major Irish broadsheet newspapers bothered to send a journalist to Moscow, opting instead to sit at home, and attempt to nab some quotes off those who bothered to attend the event, and then write articles in a manner which fools the oblivious reader into thinking they were in the Russian capital, by Rob’s side, every step of the way. 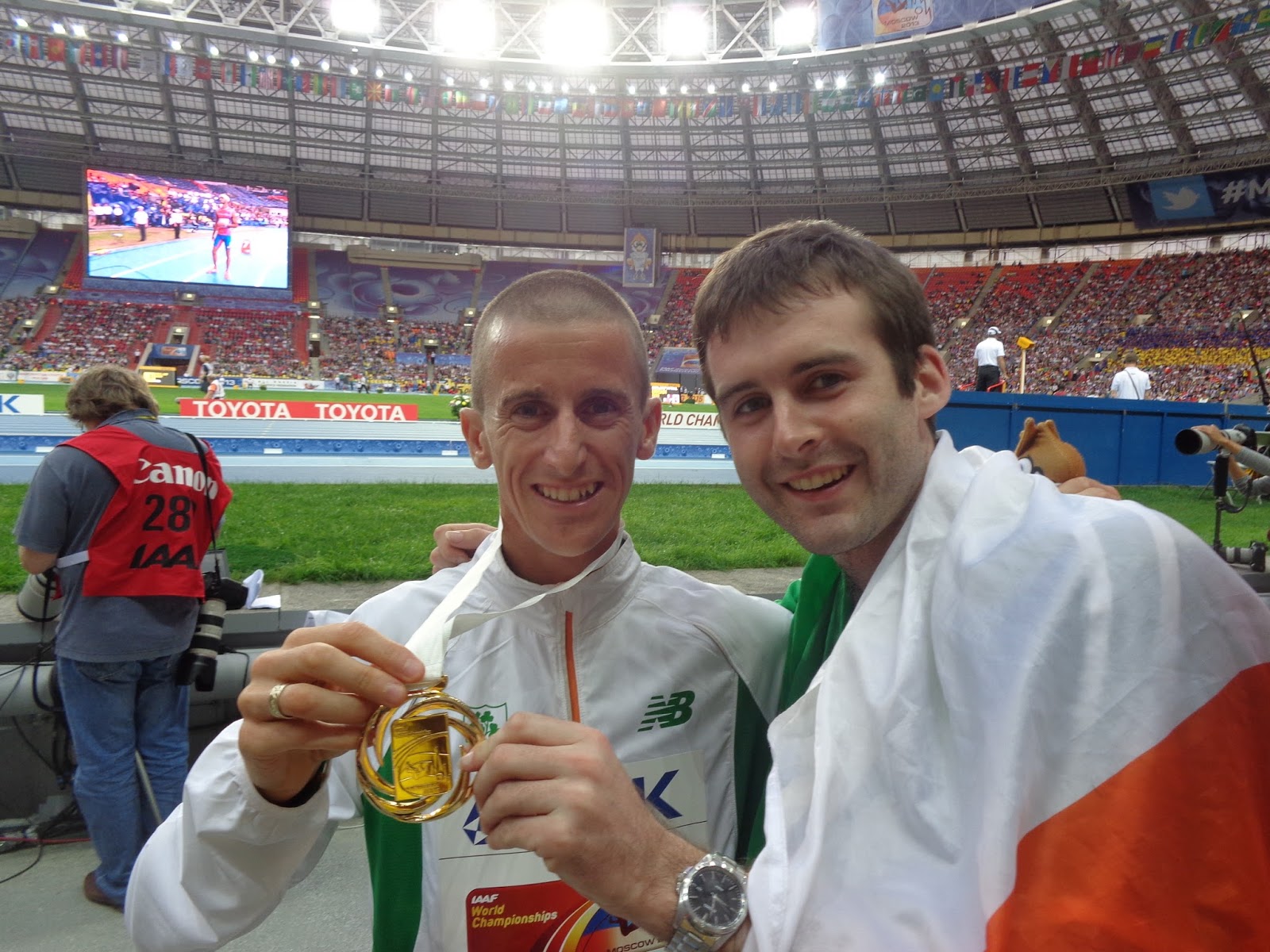 Moments after the medal ceremony

The minutes and hours following Heffernan’s victory were comical and pathetic simultaneously. Phone calls and emails came through from RTE, other radio stations, and broadsheet newspapers looking for a piece of the action. There was mass panic back home. A sport, a championship, and an athlete which a week earlier served no financial purpose to any of the above, was now the latest hot story, and they wanted in on the action. The fact the championships were ignored by the Irish media was not lost on members of the foreign press, many of whom were astonished that a national broadcaster would not attend the third largest sporting event on the planet. But I guess the Confederations Cup is more important! 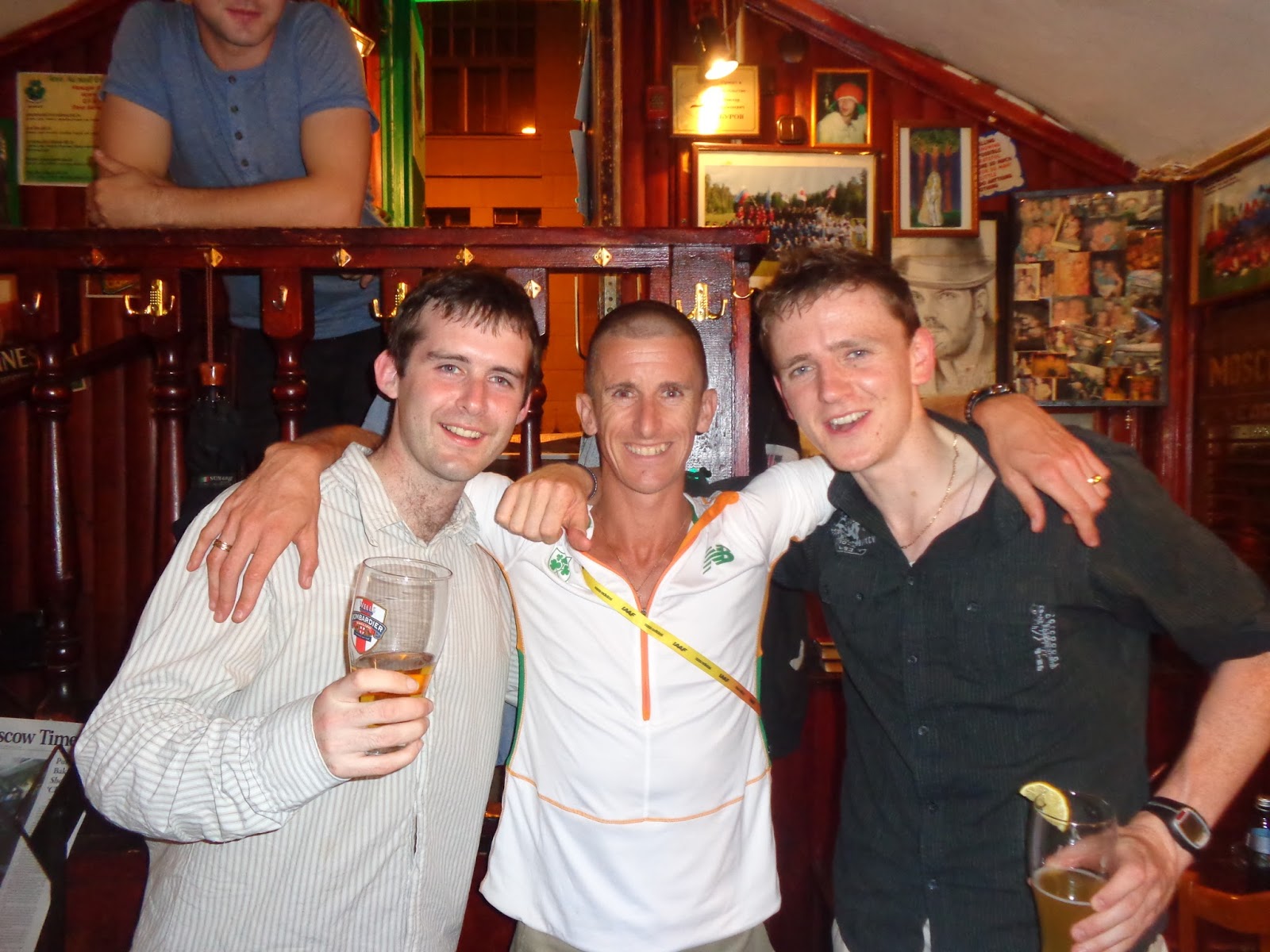 The celebrations later that evening were spectacular. The meeting point was confirmed to be Silvers Irish Bar, a tiny tavern just off Moscow’s iconic Red Square. Word then spread like wildfire. Everybody in Russia’s capital involved in Irish athletics congregated in this cosy pub, much to the very visible dismay of the local bartenders, who had anticipated an easy Wednesday night’s work. There were approximately thirty people in attendance, a small but highly dedicated and passionate group of people, all with grins as wide as Galway Bay. The man himself, together with wife Marian, made a grand entrance at 10pm, a moment which was greeted by a deafening eruption. From that moment on, the pints of Guinness and otherwise were flowing, with Rob himself getting in on the act for a much deserved and long overdue couple of beers. The festivities continued until after 3am with Togher’s finest leading the sing-a-long of some traditional Cork classics.

I never anticipated anything topping the experience of being in the Excel Arena for Katie Taylor’s Olympic boxing gold last year, but Moscow has now provided a serious challenger to this crown.