A morning of what-ifs for the Irish in Beijing, writes James Sullivan.

There was disappointment for Ireland’s Ciara Everard at the World Championships in Beijing this morning. The UCD athlete failed to advance to the semi-finals of the 800m, finishing last in her heat in a time of 2:03.98, finishing down in 40th of the 44 starters.

“I tactically just got it wrong,” remarked a frustrated Everard in the aftermath. “I think I positioned myself well for the first lap. Coming into it I didn’t really know where my form was at, but I actually felt really good in the race, but at 700 I was on the inside and I should have positioned myself on the outside. Then I had to brake to get around so it was very stop start.”

“Tactically I just got it wrong. There is no real excuse for it, I’ve been in that position before in Prague and I thought I learned from it, but I’ll just have to look at it again.”

The 25 year old was in contention through the first 600m, but lacked the required finishing speed to challenge the leaders, with the race eventually being won by Poland’s Sofia Ennaoui in a relatively slow 2:01.16. “I feel my form was there and it was good, and there was no reason why I shouldn’t have been there in the burn up. It wasn’t even that fast a pace.”

“I got sick after World Student Games and failed to fully recover from that. But I’ve been prepping for this for three weeks, so there are no excuses to be making the mistakes I made today.”

The former European Indoor finalists admitted she was in two minds on whether she would compete at all in Beijing, after a poor performance at the National Championships, where she could only finish in third place, but believes she made the right call in the end. “I wasn’t sure whether to come or not after nationals, and then I made the decision to come, and it definitely was the right decision, as there’s a lot to learn from it.”

There was a similar outcome for Ireland’s Ben Reynolds in this morning’s heats of the 110m Hurdles, with the 24 year old only managing seventh place in his heat, with a clocking of 13.72, well down on his personal best of 13.48 set earlier this month. However, the North Down athlete admitted to a heavily interrupted preparation leading into the event.

“Prep up until about ten days ago was absolutely awesome, and then I got a trace on an especially fast day on Saturday, and then I was hurdling three days after and I had DOMS,” remarked a reasonably upbeat Reynolds afterwards. “So when I got to the day I was hurdling, my whole body was fresh except my lead leg, the muscle which brings the knee up.” 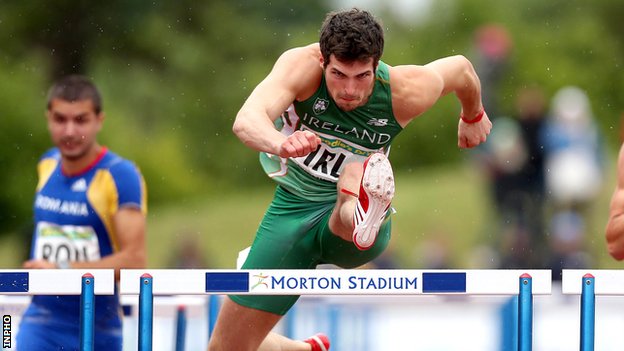 “It’s an old knee issue, kind of soft tissue. From experience I know that takes ten days to recover, it’s not the kind of thing that a day later can be good. I went to hurdle anyway, and the prior trace rose up, so I didn’t do the rest of the training, and so for 8 days I have done no training, just rest.”

The Ulsterman admitted he was caught in too minds on whether to race leading into the event, but didn’t want to pass up the opportunity to race in the biggest event of his career to date. “I thought perhaps I wouldn’t race, so I’m pleased I could. My coach said to take things easy, and maybe just cruise an easy run for experience. But I did go to run at peak pace so to speak, but the body doesn’t really let the gears switch up. It’s one of those situations where it’s probably best not to fully step up the gears.”

Despite the early exit, the Ulsterman feels that the positives outweigh the negatives, and believes he can take a lot from this experience, heading into a busy 2016 where he plans to compete in the World Indoors, European Championships, and the Olympic Games. “I’m feeling good really, because of what I have felt in the most recent eight days. I really thought I wouldn’t race. The good thing is I can sort of see that 13.4, 13.3 is right up there with getting to the semis. So if I can step up the gears a bit more I’m looking good.”