James Sullivan brings part 2 of the best quotes from the 2013 World Championships.

I do my best to get out there on the track every single day and especially in Australia when I can. If I’m not injured I get out there and I perform to my best and I try to put on a show for everyone. I do as much publicity as I can for the sport. I do my part. I am not a journalist. I am not in the media. I don’t understand the way it works. I don’t understand where they get their reasoning for putting certain things on the television and not putting other things on. That’s not my job to know those things. My job is to get out there as much as I can and to promote the sport the best way I can. It’s a fantastic sport for every single body type that is out there. I am going to be honest, it is disappointing that we only did get an hour of highlights per day but at the same time at least we got something on the TV. – Sally Pearson, on the popularity of athletics in Australian and it’s poor television coverage of Moscow 2013

I think it is too early to talk about that. The most important thing is the victory today. The world record is too far. 18.29 is a massive jump, an amazing jump. I have to get better before I can think about that. – Teddy Tamgho, on his prospects of beating Jonathon Edwards’ long standing world record

I definitely wish it was changed back. As we were going onto the track I was saying, and a couple of guys agreed, that the 4×4 is the most exciting race in track and field. I can understand why they have the 4×1 last, because of the Jamaican team and with Bolt anchoring it and it makes sense, but for quarter milers we think that the 4×4 should definitely be the last event of the championships.  – LaShawn Merritt, on the change made in recent years to make the 4x100m the last event on the programme, changing from the tradition of the 4x400m closing the championships 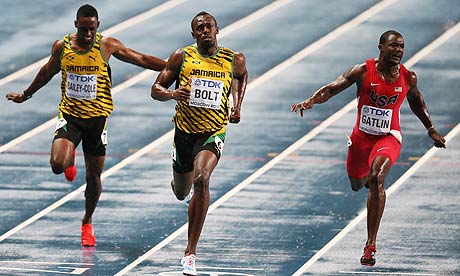 There are a lot of things that have been changed over the years. I remember when I started the Olympics I used to get one day of rest before the 200m. That has changed. There are many rules that change. I didn’t decide that so you can’t really ask me that question. Nobody has really complained about it so I guess they did a good job. – Usain Bolt, on the change made in recent years to make the 4x100m the last event on the programme, changing from the tradition of the 4x400m closing the championships

Oh I’d be way bigger than them like. This is only heightening it… What’s he laughing at boy? – Rob Heffernan, on where he stands among other sporting greats from Cork, such as Roy Keane and Sonia O’Sullivan

There are beautiful women here so I will definitely tell my friends about that. – Usain Bolt, on Russian women

Emotions were up and down. Two of us were on the Olympic team last year so we have got two new guys and they stepped up big time. To be able to run under 38 for us is huge. It hasn’t been done since those guys back in 96. GB is a great team, I know a lot of those guys and they are actually on the same floor as us so I hope it won’t get too awkward. I feel for them, having gone through it last year, but the rules are the rules. It’s a rule and we have got to live with it. – Justyn Warner of the Canadian 4x100m team, after claiming bronze following the disqualification of Great Britain

I’m not surprised because I raced the 20k in London last year and they showed a football match and they didn’t even show the race. The 20k wasn’t on RTE last year. I was in Spain training for a month and there were four nights of the week where I watched the under 23 walk on the television. There was athletics on the television all the time. When people see athletics they want to do it so it has to be on the telly. Kids need to see it. – Rob Heffernan, on the lack of coverage on Irish television of Moscow 2013

I think there is always going to be a debate about the women’s hurdle heights, and whether they could be possibly higher. But I think if it was going to change it was going to change a long time ago. I always tell people that barriers are barriers and technique is technique and you always try to learn the most effective and efficient way of clearing them so even if you may think that women can just run and jump, it’s not the case. If you look at Sally Pearson, she’s an incredible technician and I think each and every male hurdler will look at her technique with envy because it is so slick, it is so smooth. So I wouldn’t say that it is necessary that we should raise the height of the barriers for women. – Colin Jackson, on the height of the women’s hurdles 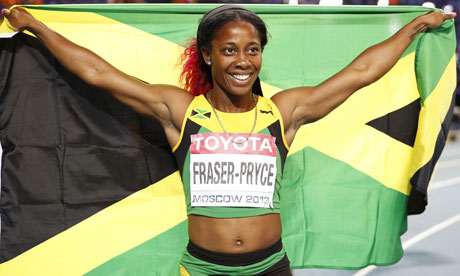 It has been a different championship. It’s not the best. But over the days I think it got better. They changed a few things. A lot more people got a little bit more relaxed. A lot more people started smiling. There were much more people in the stands, so for me it really picked up at the end, but the start wasn’t as good. So I’ll have to give it 7 out of 10. I’m just being real. The food was always the same. I’m used to going to a 100m final where the stadium is packed so that was different. At the start, the fact that people could get close to you really easily. It was little things but it wasn’t anything major. It was just things that took me awhile to get used to. – Usain Bolt, giving his evaluation of Moscow 2013

For me, I will definitely say that each person’s circumstances are different. I can’t say what transpires for each athlete when it comes to a doping violation. I mean, that is something they will have to work with their federation of course and see what’s best. For me to actually say that I would want to impose a rule or a severe punishment I think I would be out of line because everybody’s situation is different and I don’t have the heart to judge or to think that somebody should be put away for life or something like that. I’m not WADA and I’m not the IAAF so I can’t answer this. – Shelly-Ann Fraser Pryce, when asked about her thoughts on the punishment of lifetime bans and the returning of prize money earned for athletes convicted of serious doping offences