Relaxation and confidence the key to Bolt victory in Beijing

Years of experience is the difference in the toughest challenge of Bolt’s career, writes James Sullivan.

He’s achieved absolutely everything in this sport, on multiple occasions, and Usain Bolt really had to dig deep into that well of experience to get the better of nemesis Justin Gatlin to win the 100m world title in Beijing last night. It was described by some as a fairytale ending to the much anticipated showdown, but it was very nearly over before it had even begun for the Jamaican, as he stumbled badly after driving out of the blocks in the semi-final, and had to work very hard to merely secure his place in the final a couple of hours later.

“After the stumble I remember coming around and my coach asked me what happened” remarked Bolt, who recorded a season’s best of 9.79 into a -0.5 headwind.  “I said I really don’t know. He said that I was thinking about this race too much. Thinking about trying to get the perfect race and get everything ticked together. He said that I’ve been here too many times, and know what it takes to win, so just relax and just get it done and just execute. All you can do is go out there and execute as best as you possibly can.”

Justin Gatlin was tagged by many as the pre-race favourite, having dominated the event this season, and holding the world lead of 9.74. However, Bolt wasn’t fazed by the possibility of an unthinkable defeat to the much loathed American, and never doubted his ability to defend his title. “You can ask any top athlete that if you start doubting yourself you’ve already lost the race, so for me I never doubt myself. I know my ability so all I had to do was put together a great race. It wasn’t a perfect race, but I got it done and that’s the key thing.”

The experience of claiming major title after major title since 2008 was the simple difference between the two athletes last night, with the world record holder edging out the American by the narrowest of margins, with the 33 year old visibly faltering in the closing stages when his early lead started to erode.

“I really couldn’t see him for the fact Tyson Gay was in the lane between us, but I was trying to just keep my momentum going forward” said Gatlin, who has been a controversial character over the last couple of years, having returned from a second doping suspension. “I leaned too far forward, especially coming to the finish line, caught myself off balance, and by the time I looked over he was there.” 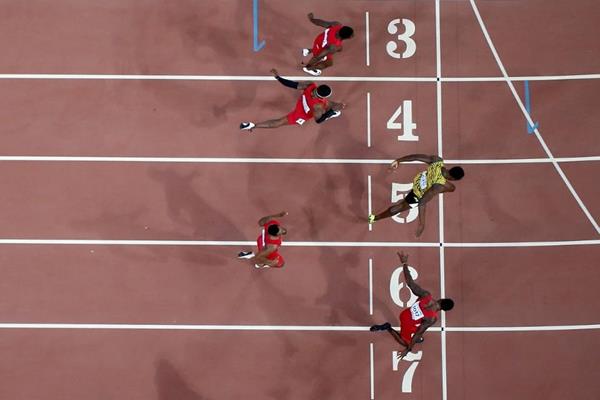 Despite a slightly below par performance by his closest rival, Bolt believes that this was the toughest challenge he has had to face during his seven years at the top of the short sprints. “This was definitely my hardest race. Justin has been running great. He’s been showing up running fast times, so I knew it wasn’t going to be easy. One thing that I’ve learned over the years is that when Justin Gatlin comes to a championship he always shows up. So for me I knew that if I’m going to come here and win, I’m going to have to run a great race and a well executed race.”

“I kept telling myself to just run through the line, because my coach said that I will have to run the full 100m if I want to win this race. I happy I got it done and I’m proud of myself.”