James Sullivan is back with part 2 of his A-Z review of the 2012 athletics year.

Istanbul was the setting for the 14th World Indoor Championships, which took place between the 9th and 11th of March. In total, 618 athletes competed, representing 171 nations. 28 countries made it on to the medals table, which was topped by the USA, who dominated the meet claiming 10 gold, 3 silver and 5 bronze. It was the multi-event athletes who provided the major highlights of the championships with American Ashton Eaton setting a new world record of 6645 points in the men’s heptathlon, while Ukrainian Nataliya Dobrynska did likewise with a score of 5013 points in the women’s pentathlon, surprisingly beating heavy favourite, Jessica Ennis of Great Britain in the process. Other highlights included Sally Pearson winning 60m hurdles gold in a rare indoor appearance for the Australian, recording one of the fastest clockings in history with a blistering 7.73 seconds, and American Brittany Resse taking long jump gold in a championship record leap of 7.23m. From an Irish perspective it was a disappointing championships with just 3 athletes representing the nation in Turkey. Derval O’Rourke disappointingly went out in the semi-finals of the 60m Hurdles in what was quite a weakened field, Ciaran O’Lionaird struggled with injury in the heats of the 1500m, while Ben Reynolds showed some promise with an encouraging qualification for the 60m hurdles semi-final.

While London wasn’t a very successful Olympic Games from an Irish point of view, 2012 provided an indication that there may be a golden era for Irish athletics around the corner. Ireland has arguably never had so much up and coming talent at its disposal and some have already began to make their mark at senior level. Firstly, there were the stunning performances of 400m runner Brian Gregan at the Helsinki European Championships. Entering the year with a PB of 45.96 the 22 year old made big strides smashing this mark by over 3 tenths with a 45.63 clocking to win his heat and qualify for the semi-finals as the fastest qualifier. Gregan easily negotiated his way to the final where he eventually finished in 6th place. At the National Championships a few weeks later he lowered his best again to 45.61.

The Barr siblings also made a strong impact in Helsinki. In her first major senior championship 23 year old Jessie Barr performed admirably, running a PB of 55.93 seconds in the semi-final, qualifying for the final of the women’s 400m Hurdles in the process, where she eventually finished in 8th place. This performance moved her up to second on the Irish all-time list, behind former World Championship finalist and fellow Waterford woman Susan Smith. Younger brother Thomas, competing also in the 400m Hurdles, finished in a highly respectable 13th place in his debut senior championships, running within two tenths of his PB in the semi-final, clocking 50.22, and missing out on a place in the final by just four tenths of a second. At just 20 years of age there is plenty more to come from this talented Ferrybank hurdler. 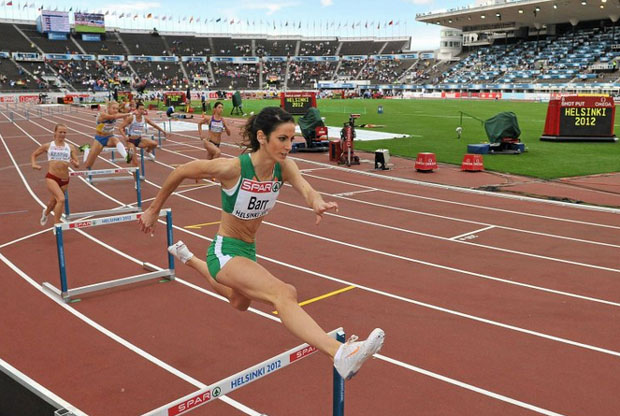 But perhaps the most eye-opening performance of 2012 from an Irish point of view was from Mark English. The Letterkenny AC athlete made a huge leap with a remarkable 1:45.77 over 800m in Oordegem, Belgium, setting a new Irish junior record, and consequently moving the talented 19 year old up to fourth on the Irish all-time list. English went on to back this performance up at the World Junior Championships in Barcelona where he finished a very impressive 5th, behind two athletes who later went on to medal behind David Rudisha at the Olympic Games.

With plenty more talent bubbling below at junior and youth level there is plenty to look forward to in Irish athletics over the coming years.

Another star of the London Olympic Games was Grenada’s quarter miler Kirani James. The Caribbean athlete stunned the world in 2011 winning World Championship gold in Daegu two days before his 19th birthday. A year on, and still a teenager, James once again set the 400m alight, demolishing the field to claim the Olympic title in 43.94 seconds on a wet night, over half a second ahead of Luguelin Santos of the Dominican Republic who took silver with 44.46, with Lalonde Gordon of Trinidad and Tobago in third place running a personal best of 44.52. This remarkable performance was the first sub 44 mark by a non-American and pushed him up to 9th on the all-time list. His victory marked a first ever Olympic medal of any colour for the tiny nation of Grenada. At just 20 years of age one gets the feeling that this exciting talent has every chance of challenging Michael Johnson’s world record of 43.18 in the future.

London played host to the 14th Summer Paralympic Games, which took place between the 29th August and 9th September, an event which saw unprecedented attendances figures, with most venues filling to 100% capacity. The track and field events played host to 1,100 competitors who battled it out for gold, silver and bronze in 170 different events. China topped the medal’s table with a whopping 33 gold medals, almost twice that of second place Russia who claimed 18, and three times Great Britain’s tally of 11 who finished in third place. In total 61 countries won a track and field medal during the Games.

Jason Smyth celebrates his successful defence of his Paralympic titles

As always Oscar Pistorious was the centre of media attention throughout the Games. The Blade Runner, as he is commonly known within the abled-bodied world of track and field,  was surprisingly beaten into the second place in the T44 200m final by Brazilian Alan Fonteles Cardosa Oliveira, who came from a long way back at half way to catch the South African in the closing stages to win in a time of 21.45 seconds. Pistorious’ reaction afterwards sparked controversy when he suggested that the Brazilian’s blades were too long and gave him an unfair advantage. Nevertheless the multiple Paralympic champion put this result behind him and gained revenge on the South American as he easily claimed gold in his favoured distance, the 400m. Arguably the star of the Paralympics however was Great Britain’s David Weir. The 33 year old remarkably claimed gold in all four events he participated in: 800m, 1500m, 5000m and marathon in the T54 wheelchair class.

From an Irish point of view London 2012 was a stunning success as the team claimed 6 medals in total; 4 gold, 1 silver and 1 bronze. Jason Smyth stole the show defending both his 100m and 200m T13 titles, both in world record times of 10.46 and 21.05 respectively. His compatriot Michael McKillop also completed a wonderful double taking top honours in both the 800m and 1500m in the T37 class. The medal winning performances were completed by discuss throwers Catherine O’Neill (F51/52) and Orla Barry (F57/58) who won silver and bronze respectively.

Few events in 2012 were dominated by one person to the degree seen in the Men’s 100m Hurdles. American Aries Merritt recorded eight of the ten fastest times over the event including the seven fastest. At the London Olympics he won the gold medal with a PB of 12.92 seconds, defeating US compatriot Jason Richardson (13.04) into second place. A couple of weeks later Merritt stepped his dominant form up another couple of notches, smashing the world record at the Memorial Van Damme Diamond League meeting in Brussels, with a sensational clocking of 12.80 seconds. This was a huge 0.07 seconds inside Cuban Dayron Robles’ old mark. What makes this performance all the more remarkable is that since Renaldo Nehemiah set the standard at 12.93 in August 1981, the world record had only progressed by 0.06 seconds in over three decades before Merrit tore up the record books. It is safe to say that the bar has now been raised significantly in this event.

In comparison to recent years 2012 was a quiet year on the national record front. During 2011 there were 5 new senior outdoor Irish records set:

The 2012 Olympic Games have filled many with wonderful memories and it wouldn’t have been possible without the exceptional organisation around London which ensured everything ran smoothly. First there were the volunteers, whose tireless efforts and constant cheer made even the longest of queues that bit more bearable. Then there was the security which far surpasses anything that has ever been seen at a sporting event before. Entering the Olympic Park required the same level of scrutiny as crossing security control in JFK Airport, and despite the inconvenience it provides at the time, it’s the way it should be. The knowledge that there isn’t some imbecile inside the venue ready to make a name for himself at the biggest event in the world is comforting. And finally the transport system. While the Tube may be a mix between a sauna and restaurant overly exposed to garlic, there can be no complaints with regards to the efficiency in which it was able to support so many people travelling around the city. There were worries that London’s transport system wouldn’t be able to deal with the sheer numbers of people, but these fears were unfounded.

For 16 days, London ran faster, jumped higher and threw further than the rest of the world. Over to you Rio!

Sally Pearson claims Olympic gold by the narrowest of margins

Another highlight of the Olympic Games centered around the women’s 100m hurdles with one of the sport’s greatest ambassadors, Sally Pearson claiming the Olympic gold that her dominance over recent years deserved. Pearson, who ran the fourth fastest time in history (12.28) in 2011 when claiming World Championship gold has been almost unbeatable over the last two years and entered London as the clear favourite to claim the one title that eluded her. However, the Australian had to battle all the way to the line, edging defending champion Dawn Harper of the USA by just 0.02 seconds with an Olympic record time of 12.35 in unfavourable conditions. With the pressure of the Olympics now off her shoulders, few would bet against the Queenslander breaking the long standing world record this coming season.